The Samsung Galaxy A5 and Galaxy A7 have been granted WiFi certification by the WFA, WiFi Alliance. Both the devices are expected to be launched next year. 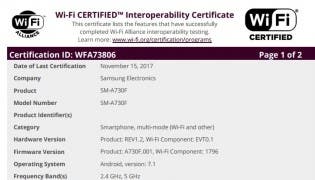 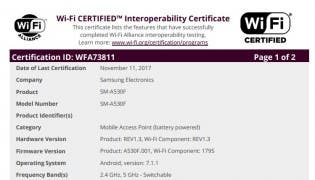 The Samsung Galaxy A5 and A7 are certified for WiFi 802.11 a/b/g/ac. According to the documents, both the smartphones will feature Android Nougat 7.1.1. But like their predecessors, they will receive an update to the next iteration of Android.

The A series of Galaxy smartphones are feature rich with a considerably low price tag as compared to the flagships. If recent reports are to be believed, both the smartphones will feature full screen aka infinity display, as Samsung calls it. They might even feature a dual camera setup on the rear. The Galaxy A5 popped up on FCC hinting towards an imminent launch. Samsung has not given any word regarding the launch of the next gen A series but we speculate that they might see the light of day anytime between the 1st and the 2nd quarter just before the launch of the Galaxy S9 and S9+.

Both the phones will be competitively priced to tackle the competition in the mid range market. Keep watching this space for more news on tech, smartphones and gadgets!

Next Samsung Galaxy S9 to Come in April