Yesterday we’ve talked about some photo samples from Gionee S11S that surfaced online. Today is the time for another device from the S series have it specs exposed. The Gionee S11.

According to recent reports, the company is scheduling an event for the next November 26, where both Gionee S11 and S11S will be unveiled. Both smartphones brings nearly same specs, although S11S get the upper hand here. Today, Gionee S11 specifications appeared through AnTuTu. 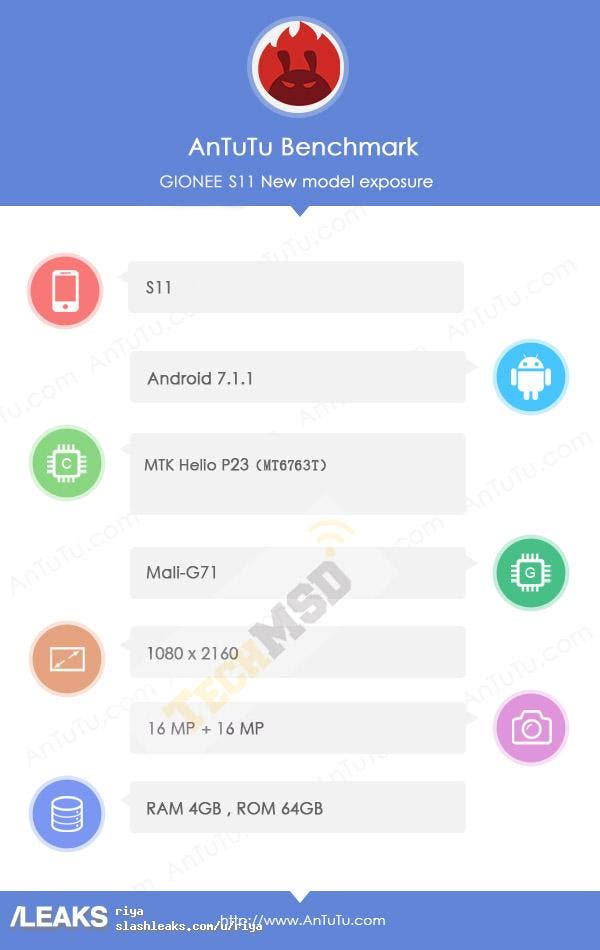 The Gionee S11 will arrive with 4GB of RAM coupled by 64GB of onboard storage, there’s no mention if the handset will also support memory expansion via microSD card. Those specifications come beneath a 6-inch screen with the 1080×2160 resolution resulting in a 18:9 aspect ratio. The handset comes with plenty of juice due to its 3,600mAh battery.

Camera wise, the leaked shots says 16MP+16MP, but we already know that the Gionee S11 will come with a quad camera setup. Being a pair of 16MP + 5MP on the rear and another 16MP + 8MP for selfie lovers.

According to official reports, Gionee S11 will arrive in three color variants: Blue, Gold and Pink. The release of this and another handsets from Gionee should happen in the next week, November 26. So stay tuned for more details and full coverage.