Yes, you got it, we have a review of yet another bezel less smartphone guys, and this time it’s the Ulefone Mix. As bezel-less phones are currently trending in the market, most Chinese manufacturers are competing among themselves to produce the best one with the best features that fit in most of the budgets and most of them have already earned huge success in this segment. 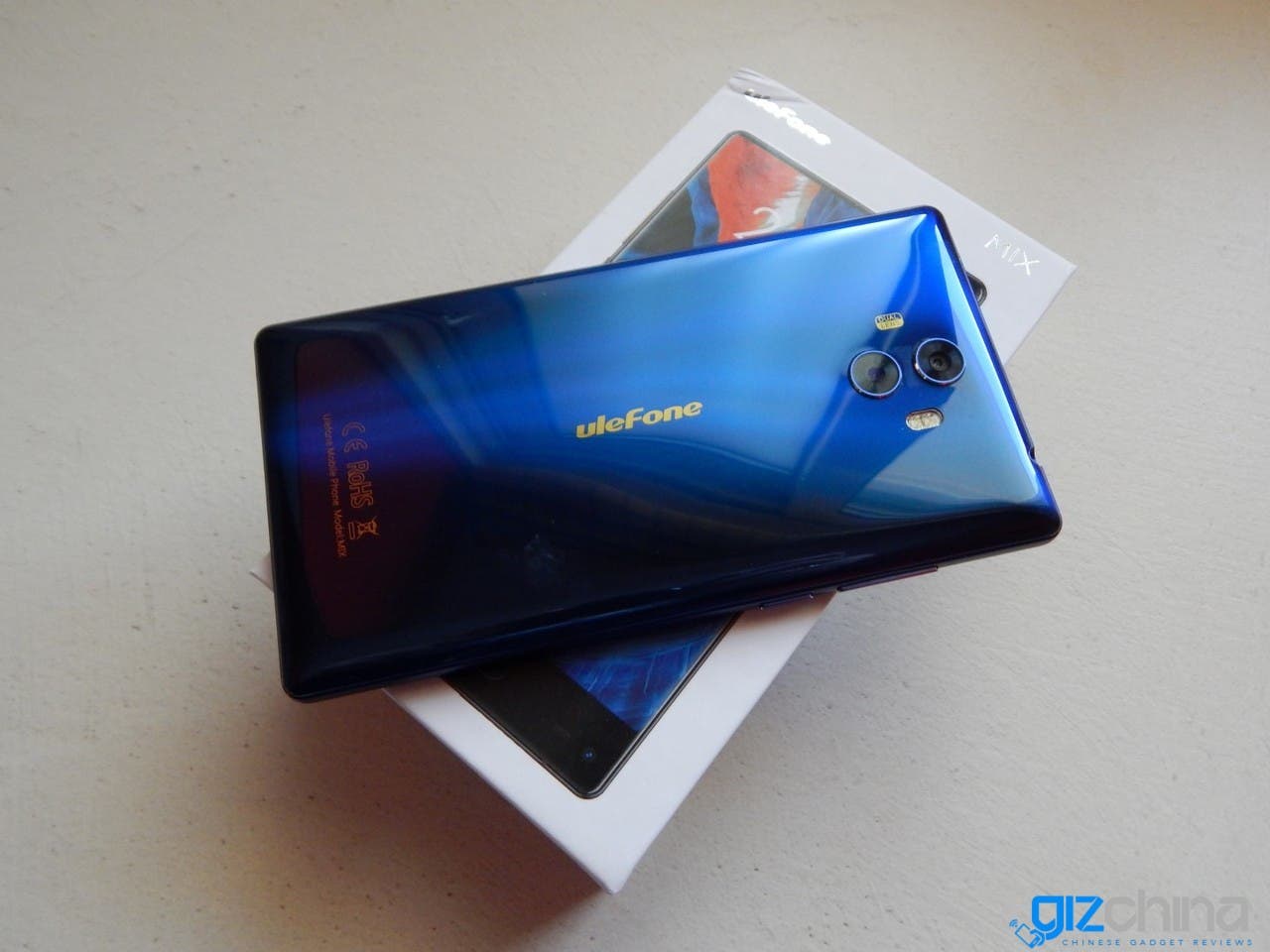 Ulefone is no stranger to us and they managed to enter this segment of the market with their own Mix proposal. Meet Ulefone Mix guys, a budget Mi MIX clone that comes with decent specs (4GB RAM, 64GB ROM, MTK6750T Octa Core 1.5GHz) but a decent price as you may notice: 139,99$ at the time this review was posted. 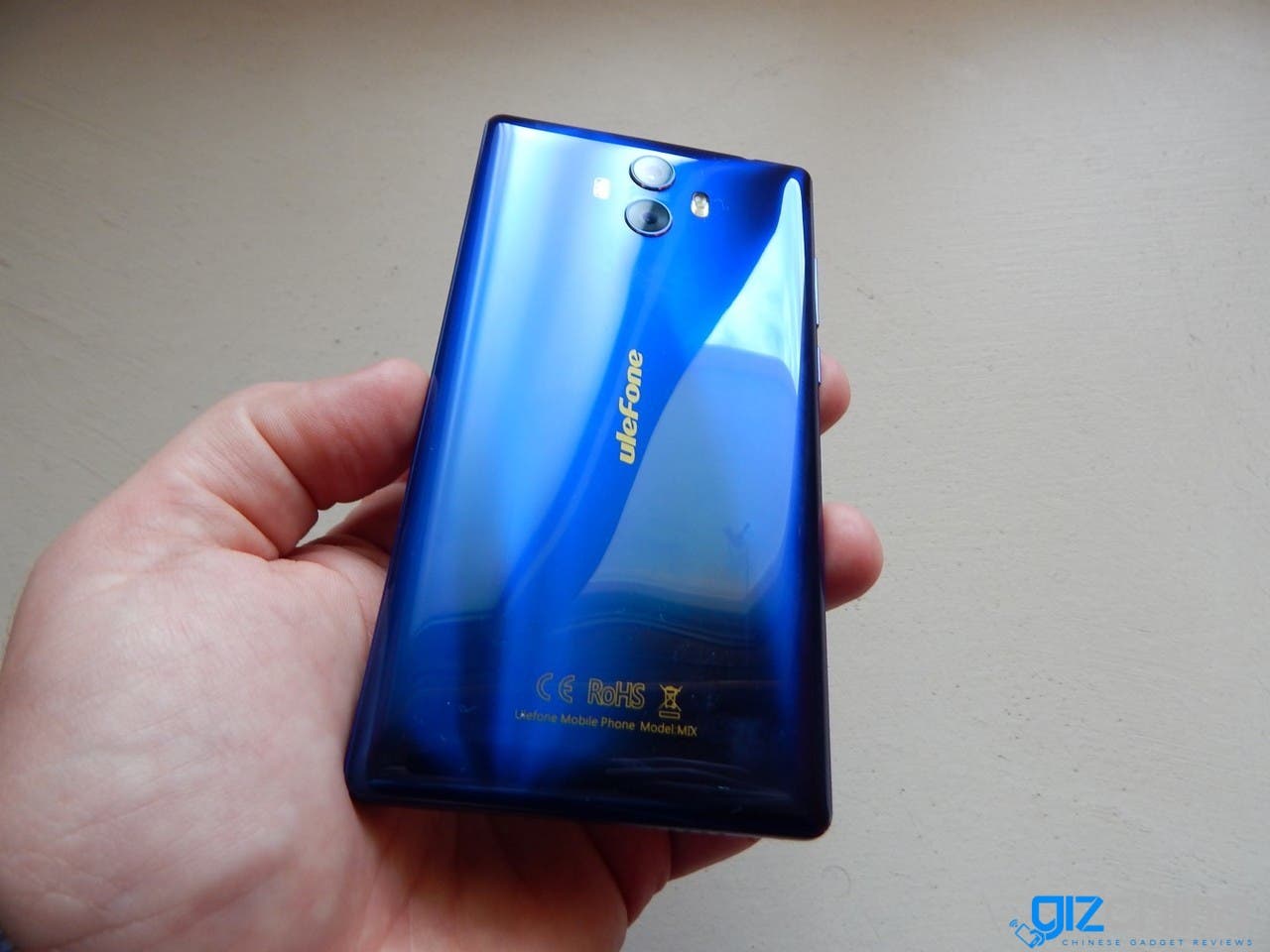 The Chinese manufacturer promotes this model as one of the most impressive dual camera/bezel less smartphones and has serious expectations from its performance in the mid-range market. So how does this affordable dual camera model fare at the end of the day? What are its best attributes and where could we see it… do a bit better? 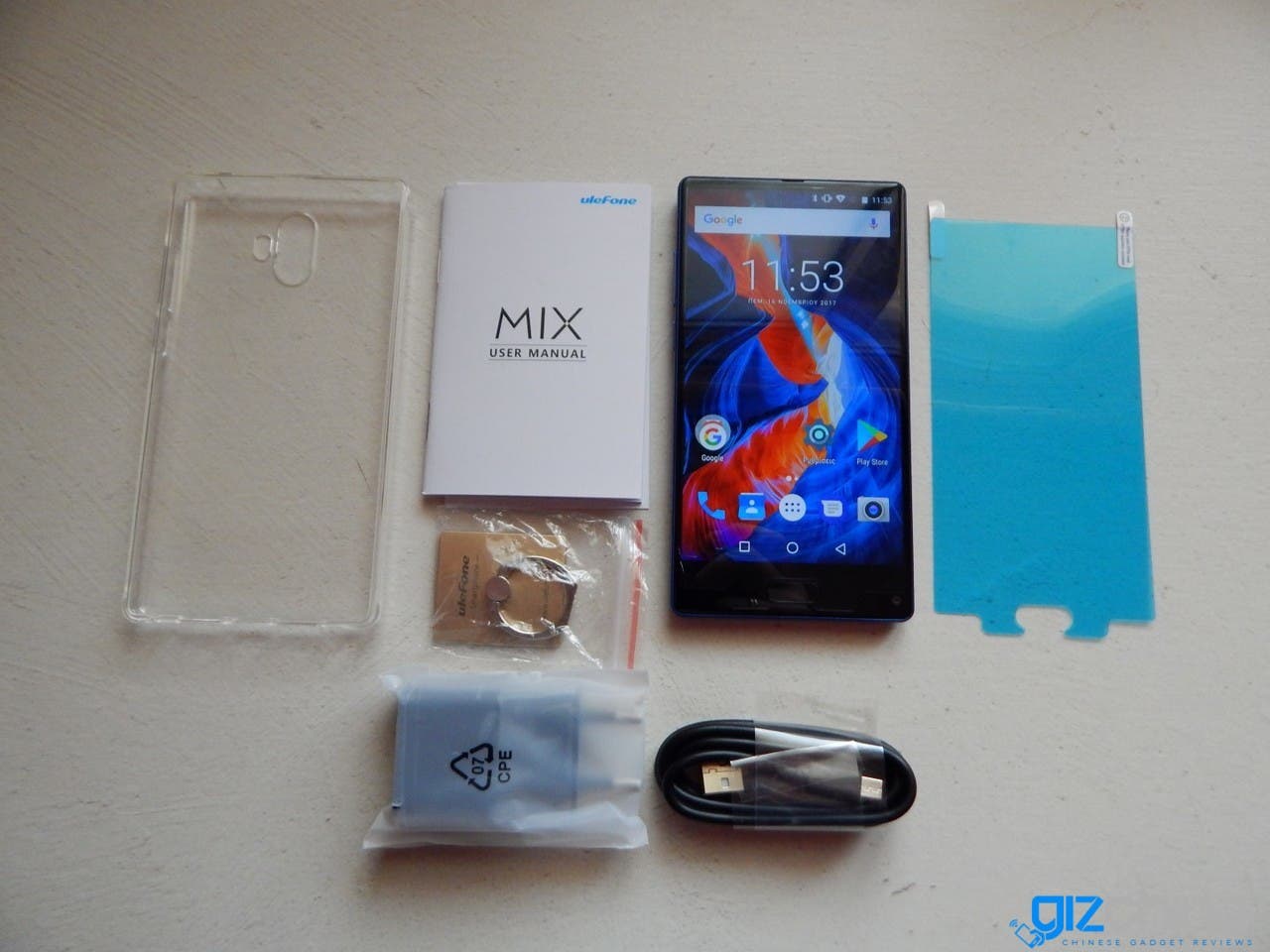 Let’s have a look at this Ulefone Mix review. 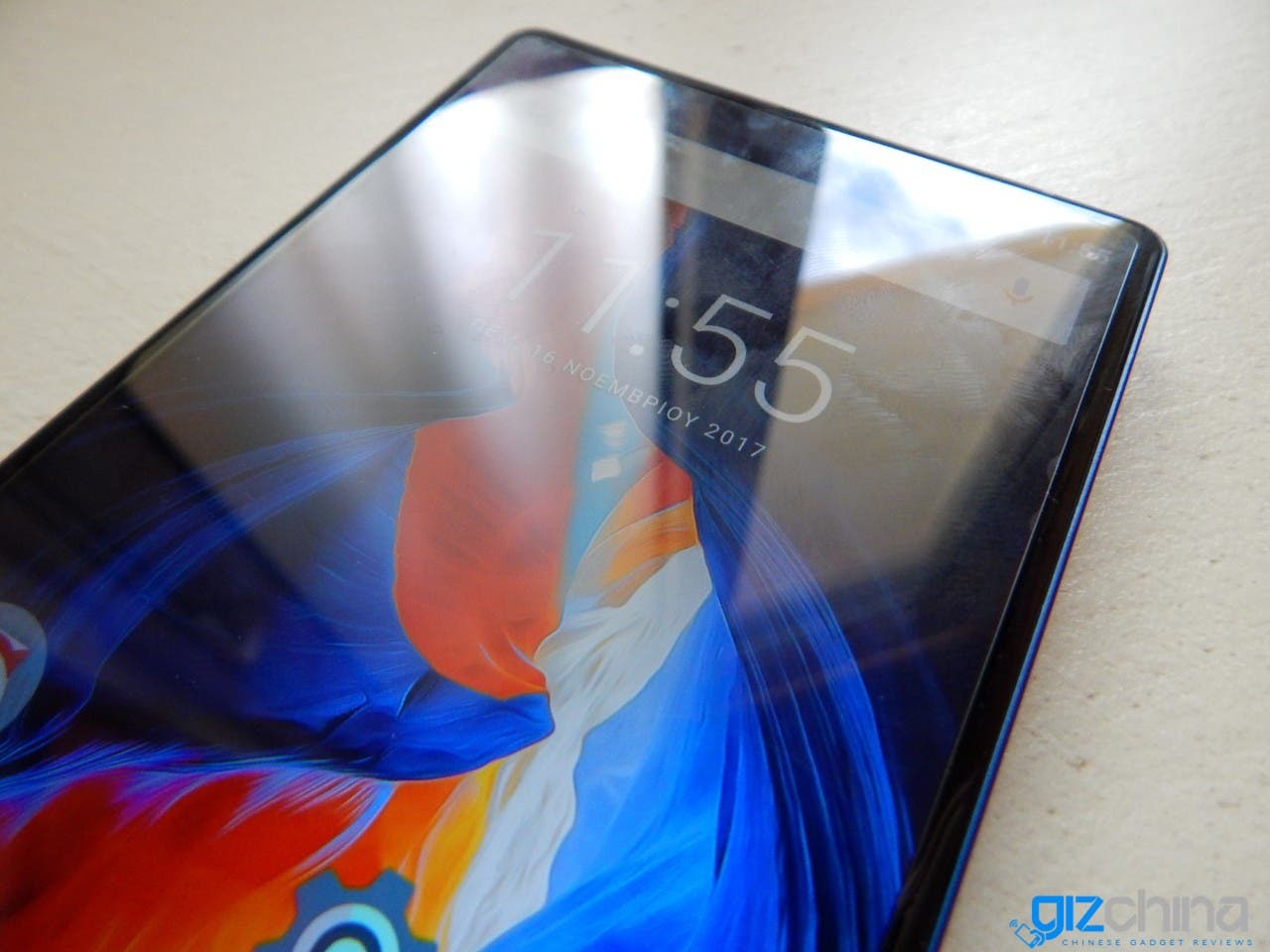 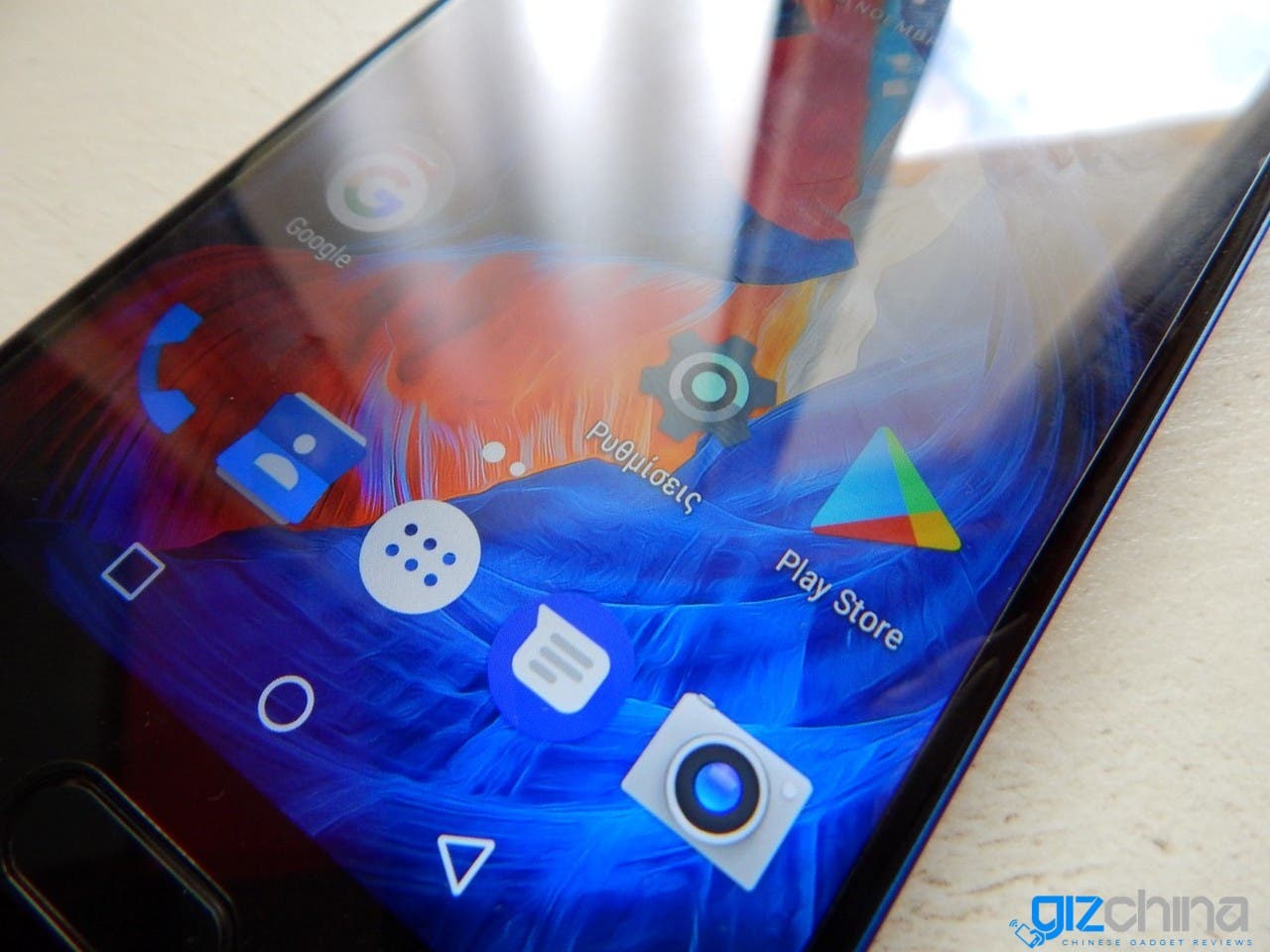 What I can say for sure, is that the phone, is really good looking, and quite impressive – especially its back side, that glows during daylight, and can easily become a smudge magnet unfortunately. The Ulefone Mix is available in 2 color variants which are mainly: Black and Blue and I ordered the Blue one, which basically looks much betters in terms of appearance according to my taste. 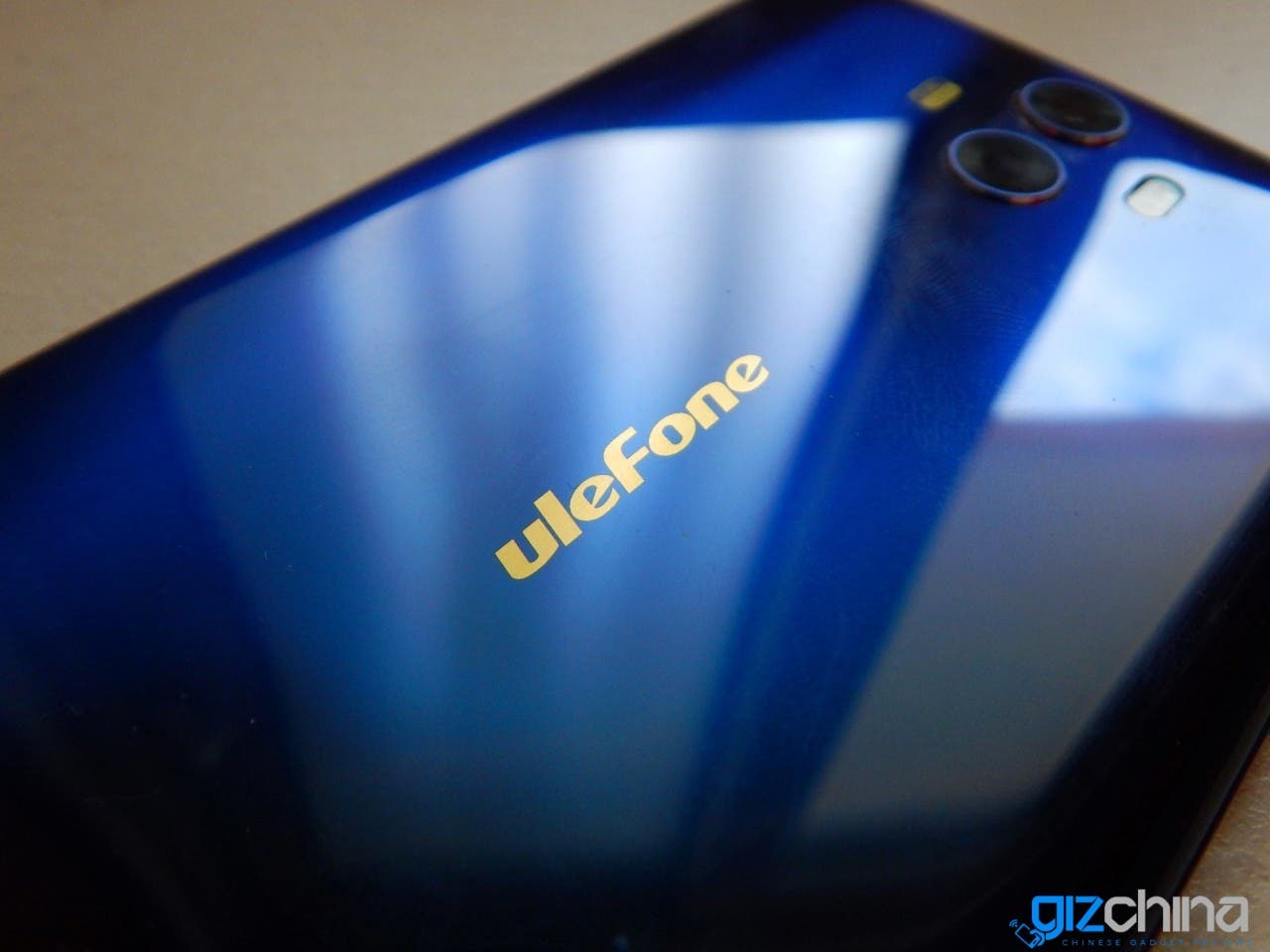 As its name confirms, one of its unique selling points is “bezel-less,” but in fact, there is a tiny bezel of 2mm around it. Surely the top bezel is very impressive and basically extends the display all the way to the top, leaving just a small gap for the speaker.

Ulefone MIX is a pocket-friendly smartphone if we look up to the size. Nonetheless, the device comes up with metal framing and Corning Gorilla Glass 3. So if by mistake your phone falls or bumps into something, the display won’t get damaged like other phones.

There’s also a front facing camera placed at the bottom bezel (a typical solution these days for Chinese manufacturers), along with a home button with an embedded fingerprint scanner. The fingerprint scanner is quite decent for what it’s worth.  It can unlock the phone in less than 0.1 second with almost 97% success rate. It can basically store up to 5 different fingerprints and can recognize them all from 360 degrees, something that’s a standard nowadays. 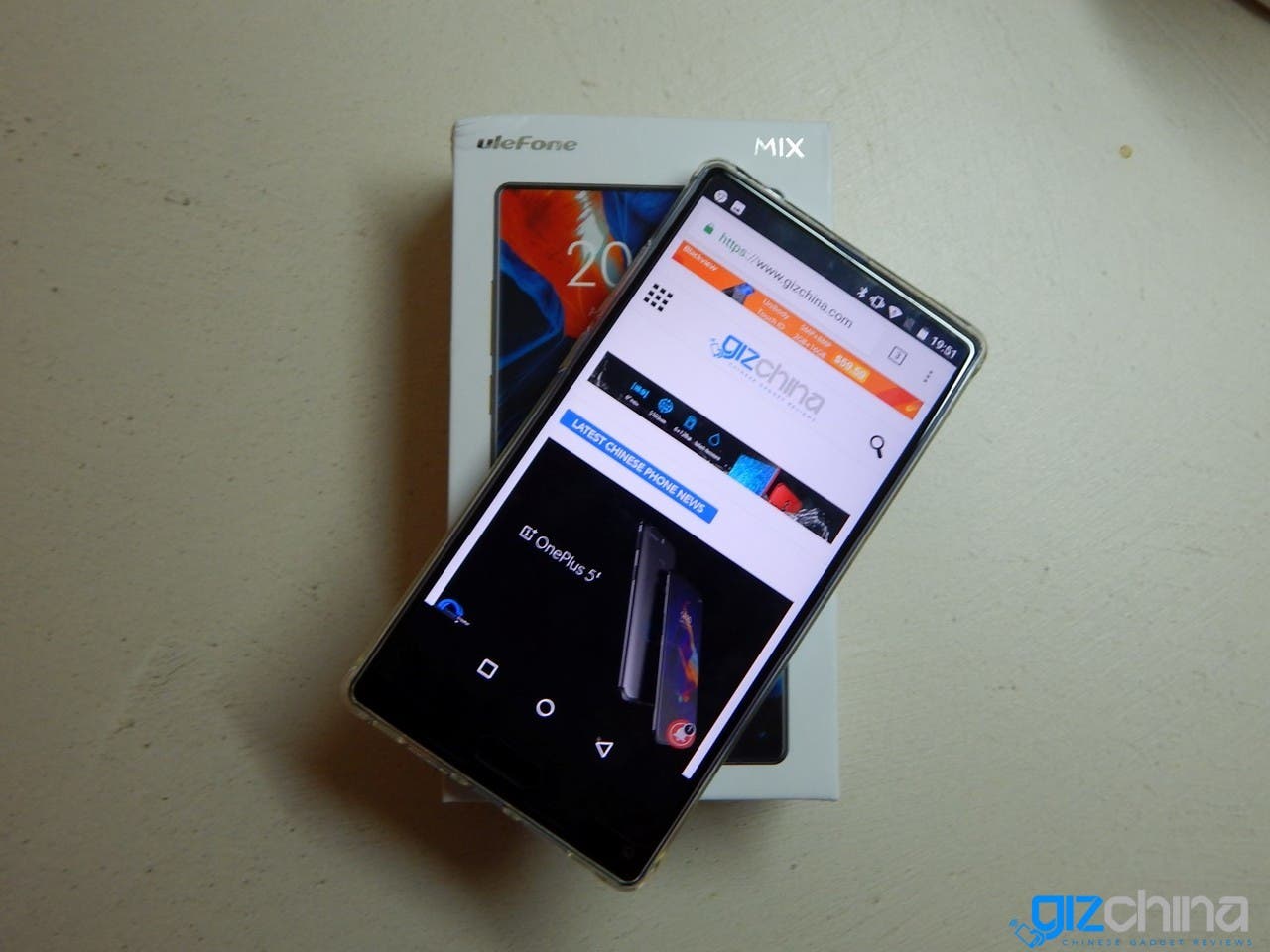 Unfortunately the one button you will find placed below the display doesn’t function as a “Home button” by default, though it can be configured to perform actions like Go Back, go to Home, or launch Recent list with a single tap or press and hold. It doesn’t have any capacitive buttons beside the fingerprint sensor, so there is some wasted space at the bottom area. So, if you’re looking for the 3 Android soft-keys you will find them at the bottom of the display, inside the menus. 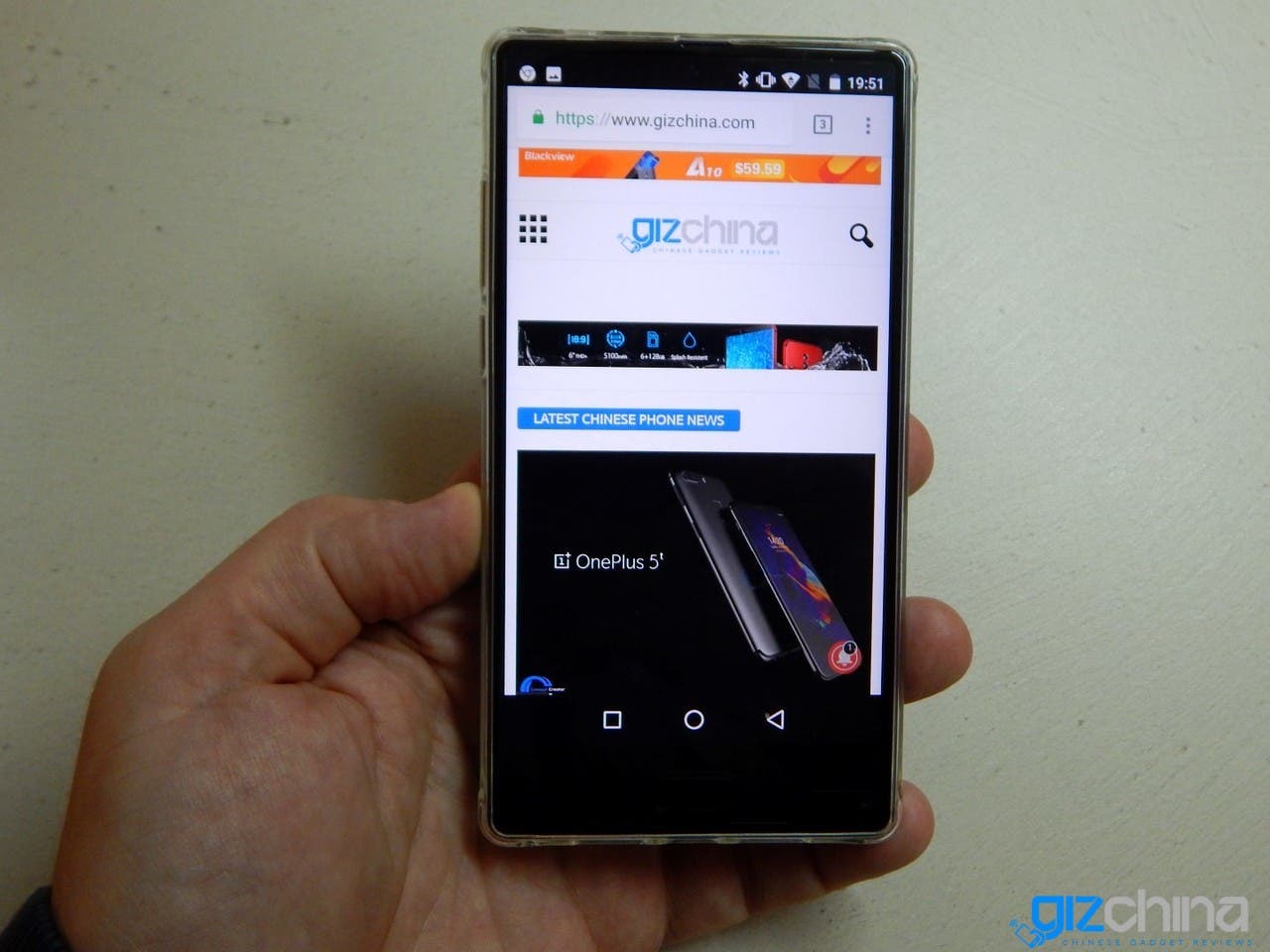 As you may have already learned by now, the selfie camera is placed just below the display and if you want to use it in an acceptable way you’ll have to turn the phone upside down when in Camera mode. The viewfinder menu will rotate and you will be able to shoot some decent selfie photos or snapchat videos. 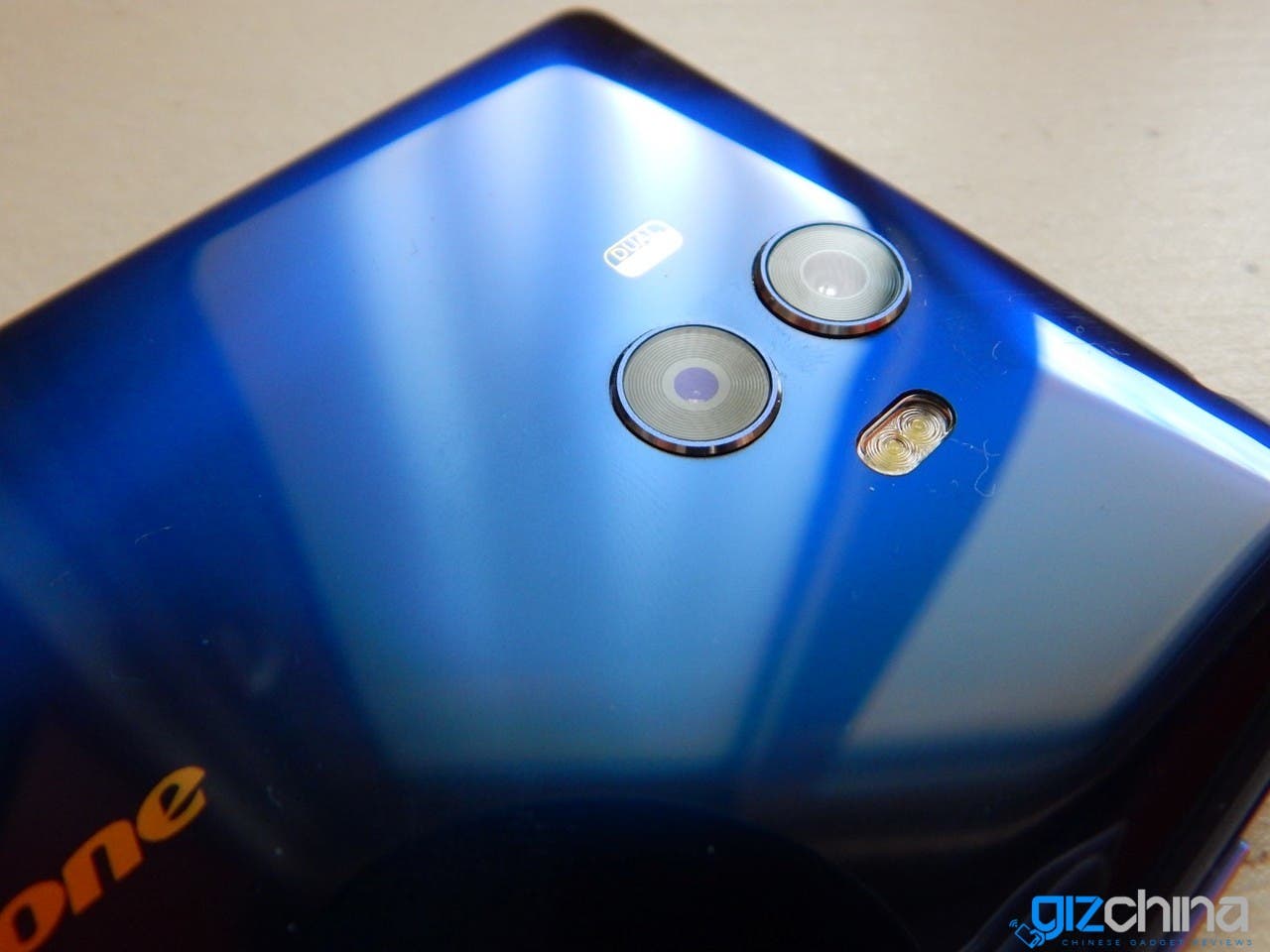 One of the main features of this Mix clone is – no doubt- its 5,5 inch display, with a typical resolution of 1280×720 pixels, anti-glare coating, offering quite vivid colors that will surely impress you. At the beginning the low resolution maybe quite noticeable, but after a couple of days you won’t have any issues using it. The colors of the display may be rather saturated, but the images are crisp enough, offering a “deep” black color, with good viewing angles and a fully responsive panel if I may add. All in all a decent display – especially for a smartphone on this price range. 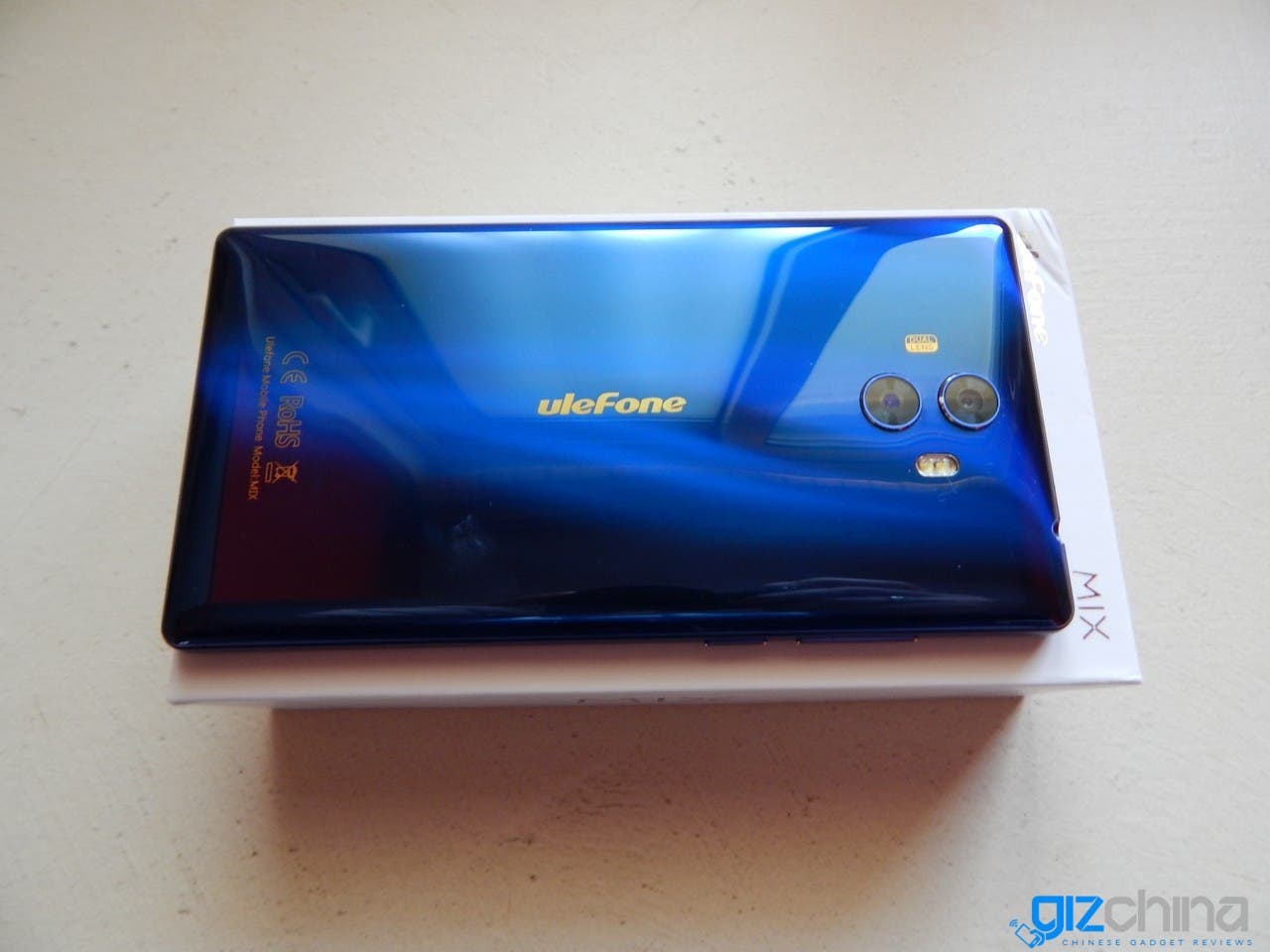 There’s a main camera located at the back side of the device, boasting two lenses – a setup pretty common in phones nowadays with the goal of helping you take better photos. There’s also a micro USB port placed at the bottom, along with speaker grilles and a 3.5mm audio jack on top.

As far as power is concerned, this Ulefone Mix in the test comes loaded in all sections. On the one hand, we have one of the best MediaTek processors, an MTK6750T 64bit Octa Core running at 1.5GHz, paired with a Mali T860MP2 GPU, 4GB of RAM and 64GB of internal storage expandable up to 256GB. All this, accompanied by Android 7.0 Nougat. 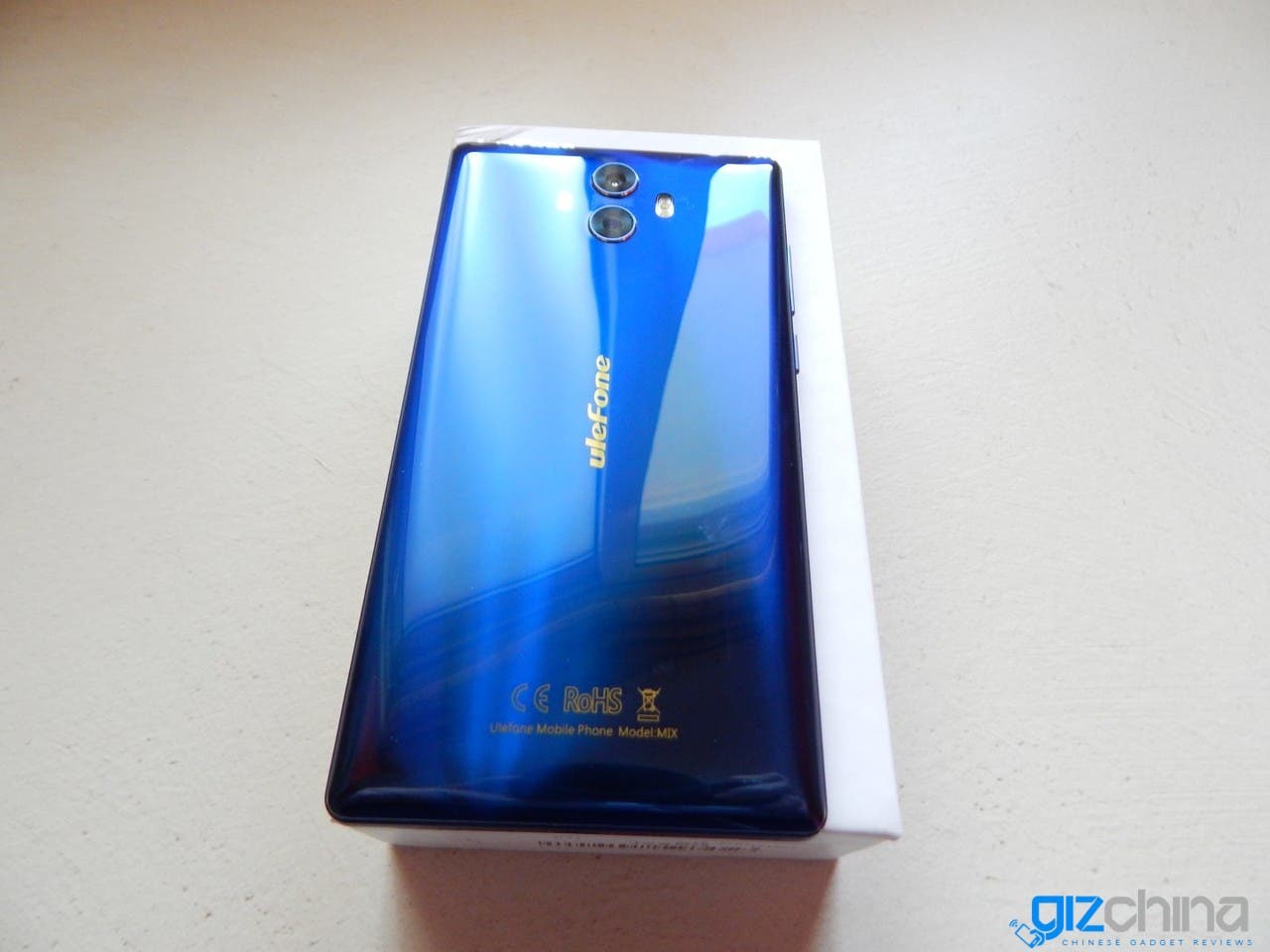 It offers a rather decent user experience with minimal lags and good multi-tasking (thanks to 4GB of RAM of course), enabling users to keep several applications open in the background with no significant impact on its everyday performance. Oh and if you’re into checking benchmark results, the Ulefone Mix scored 42231 points in AntuTu which is a typical result for this type of chipset when paired with this hardware (RAM, GPU).

On the other hand, the battery life is great. On normal usage (reading emails, watching videos, surfing the Web, listening to music), you can easily get a day and a half (a whopping thirty-six hours) of usage for each charge. For streaming videos at full brightness and volume, it can last for eight hours. Depending on your usage, it will have no problem lasting for a full day. 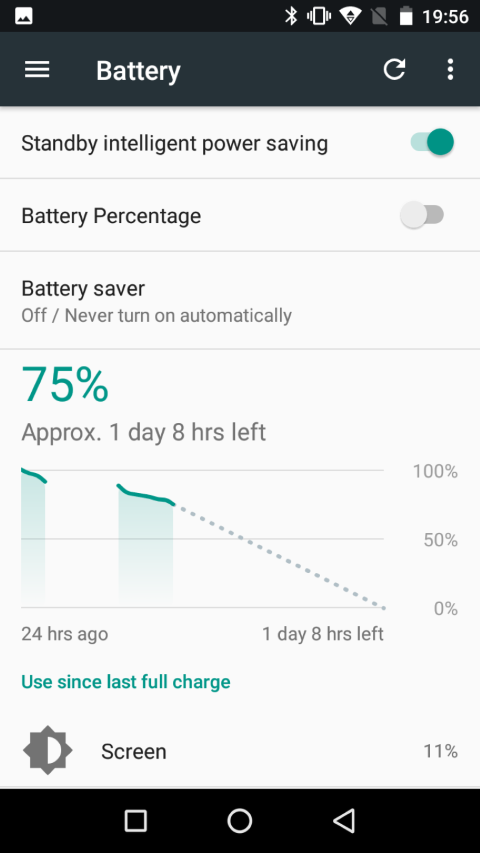 The Doogee Mix runs on Android 7.0 Nougat equipped with a custom Freeme OS launcher that’s practically pure Android, but with a few configurations added (which in case of not liking we can always get rid of them). In fact I did install Nova Launcher a couple of days later, as I prefer its settings and ease of use. In any case, the Android 7.0 gives you more control on the smartphone and also lets you customize the phone just like any other Nougat based device.

Thankfully there is no bloatware or other unnecessary apps inside, it supports all the classic Nougat features with only minimal Google Apps preinstalled. You can always install anything else you may like of course.

Other customization options include Float gesture, which is a floating ball that opens a radial view for you to quickly access various modes. I don’t find this useful, as it doesn’t allow me to customize the control items in the list. There is also the One Hand FloatView where you can swipe in from the bottom right corner to reveal a floating list. Once again, I don’t find this useful as it often takes a number of tries to bring up to the screen. 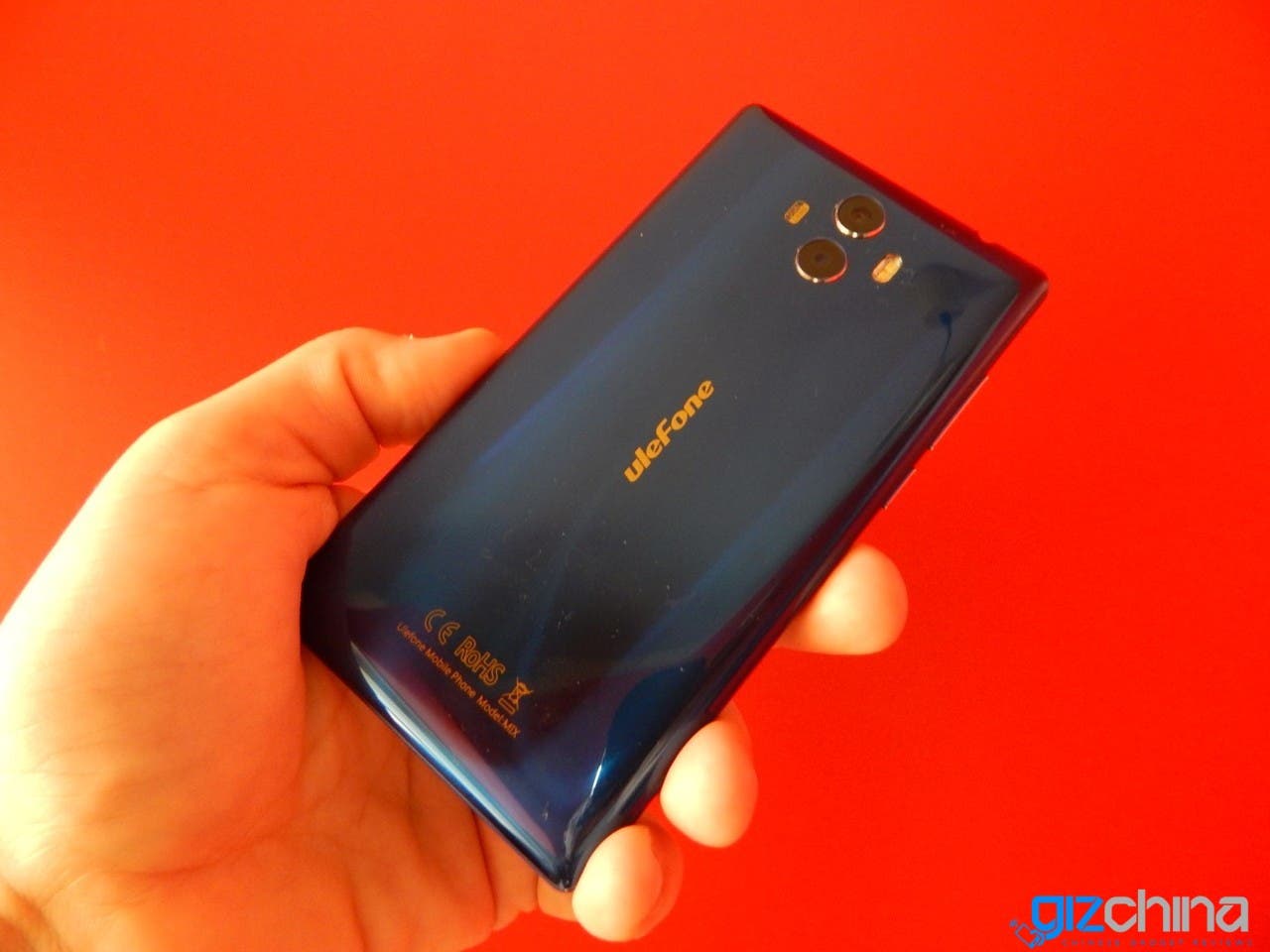 The fact is it doesn’t translate to great photos but, quite decent ones. There is good depiction of details when the lighting is plenty, but things become dire at the end of the day, or in places with poor sunlight.

Have a look at some sample photos from the dual camera of the Ulefone Mix by clicking below: 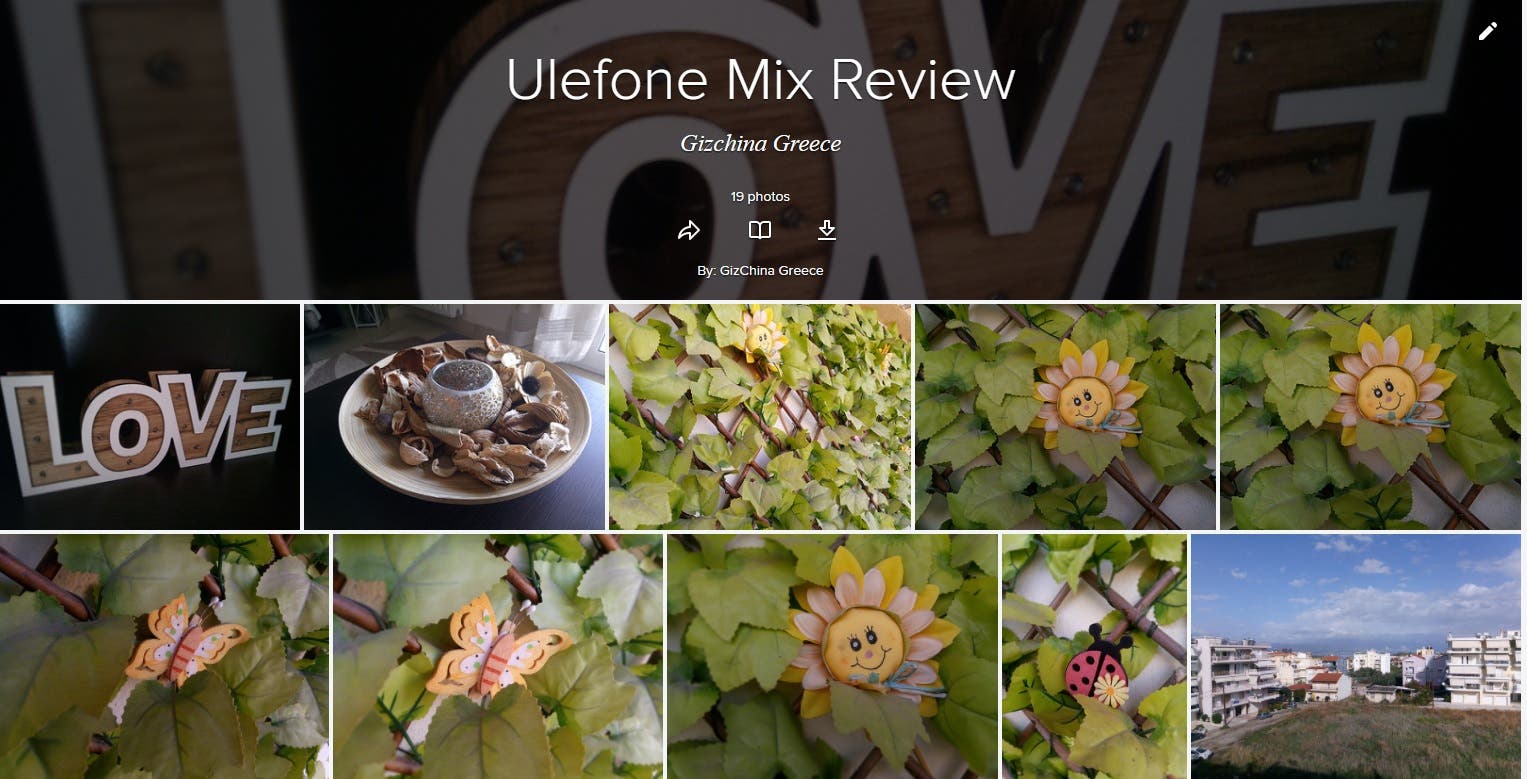 Note that one camera is used for creating the bokeh effect and other will capture the image with quite impressive portrait photos and decent performance in low light conditions.

give your best shot with the camera, it’s worth it (during the day)

Both cameras have independent vision processing unit, which enables background blurring in real time. It also allows you to choose where to focus (touch focus) and where to blur, with the ability to adjust the intensity of blurring, too. 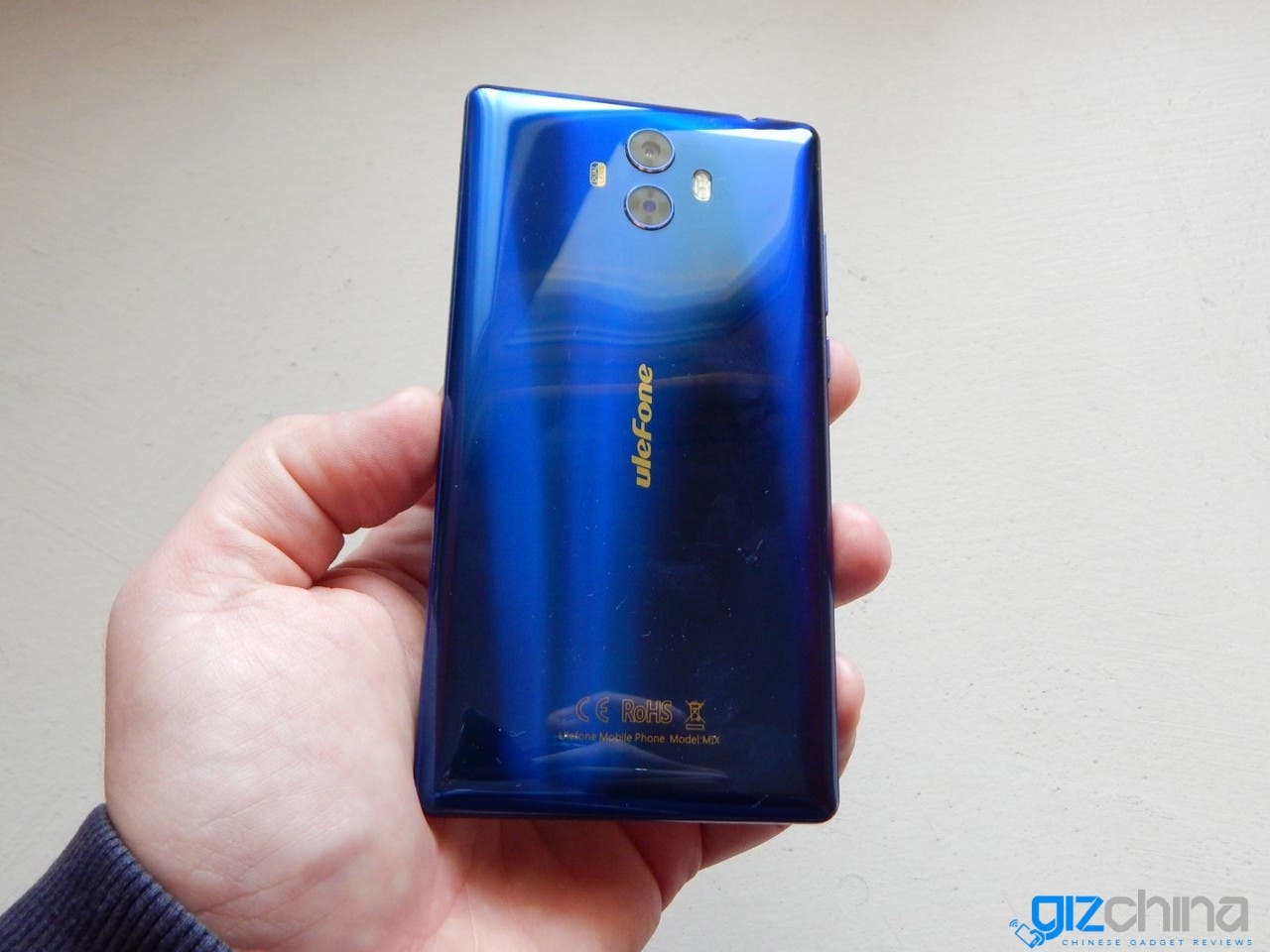 For all those Snapchat fans out there, the Ulefone Mix comes with an 8MP selfie camera with aperture F2.2 and wide angle of 88°. You can shoot typical selfie shots, but do stay outside if you want some detail in them. In clubs, or in places with poor lighting you won’t be that impressed. 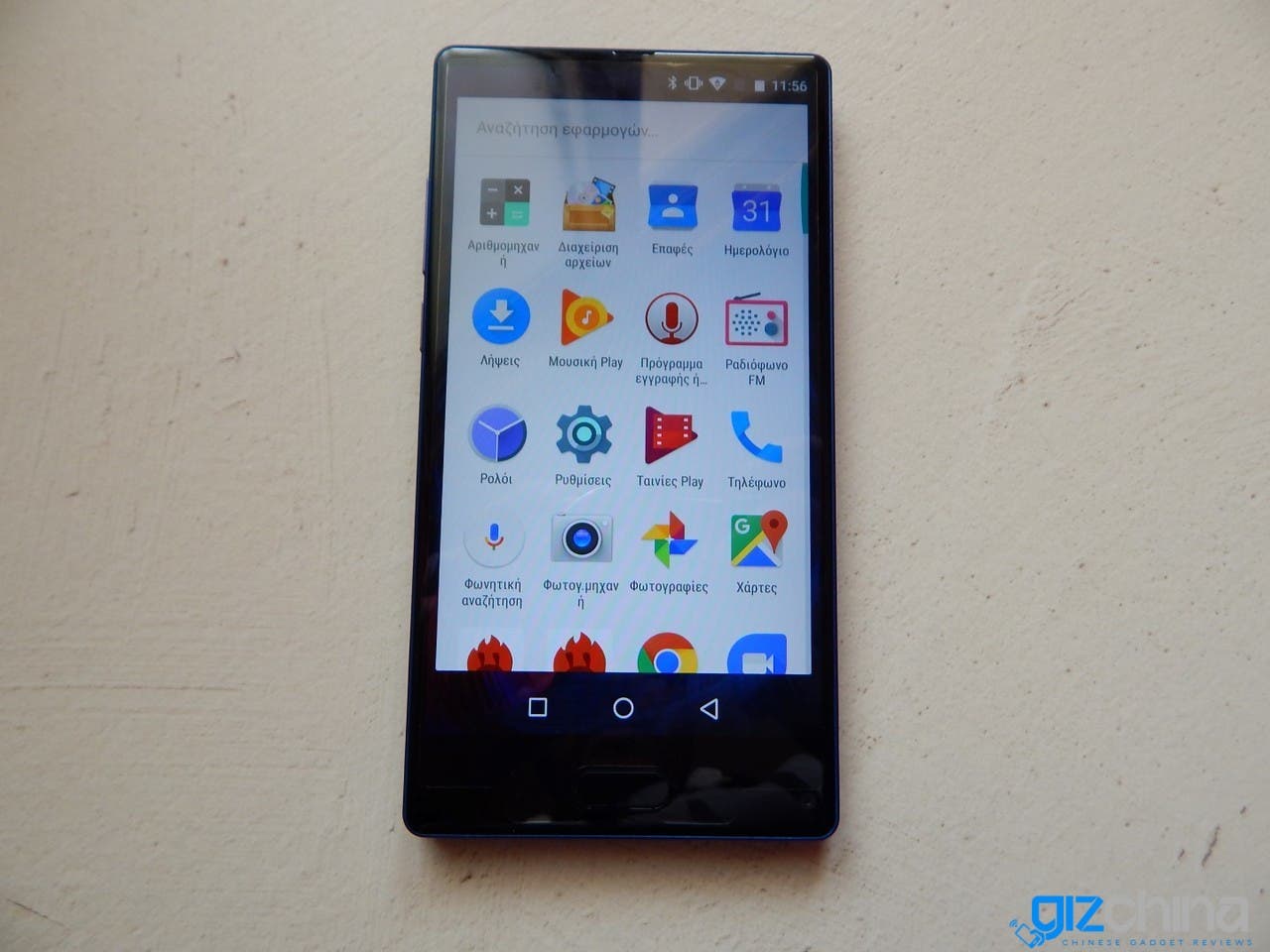 The Ulefone Mix is equipped with a 3300mAh battery that works great with the energy efficient processor from Mediatek and it performs well, providing more than a full day’s usage with no problems. Note that it works great in cooperation with the Android Nougat interface in order to block access to battery “hungry” apps, reduce energy consumption when possible and all those little things that make our lives easier when using a smartphone.

You will be satisfied with the battery performance of the Ulefone Mix, that’s for sure. If you’re a heavy duty user then you can safely expect a little over 7 hours of active screen, but depending the way you use it you can easily get up to 1,5 days of usage 🙂

A beauty but still no beast

I have to say that I was impressed by the looks of this device. It’s back plate is truly amazing to look at, its dimensions are “just right” for the average user, and it offers typical performance for a mid-range Chinese model. 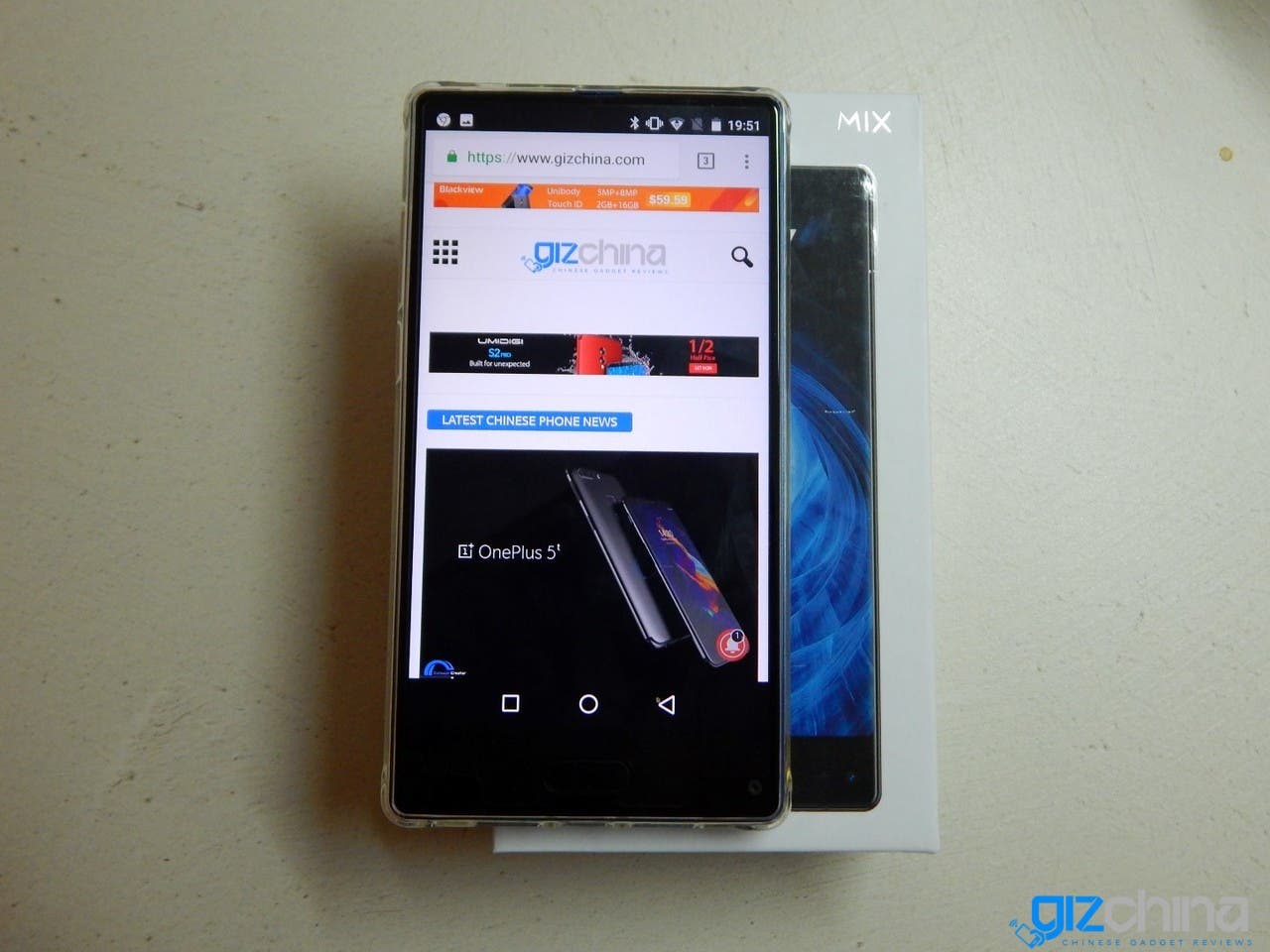 You can find the Ulefone Mix for just 139,99$ at the time this review was posted.