The Samsung Galaxy S9 is rumoured to undergo production this December. The latest leak was put up on Slashleaks which gives us an idea about the specs of the upcoming smartphone. 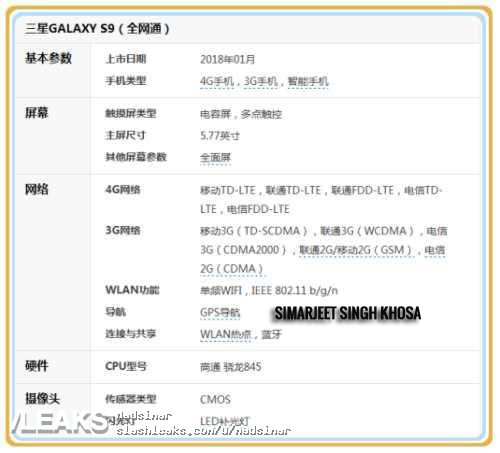 From what can be inferred, the Samsung Galaxy S9 will feature a 5.77 inch display, which we are assuming will be the infinity display, as reported by earlier leaks. Under the hood will lie Qualcomm’s next flagship, the Snapdragon 845. Other than that, the Galaxy S9 will feature the usual connectivity options like GPS, WiFi, etc.

According to previous reports, Samsung tried implemting an under-the-screen fingerprint scanner, but decided to not stick with a scanner that rested right below the camera setup, which is expected to be dual. If rumors are to be believed, the Samsung Galaxy S9 will be heading into production this December and will be launched anytime in the first quarter of 2018. But these are all rumors and no solid word has been given by Samsung regarding the timeline or existence of the Galaxy S9.

Samsung brought the infinity display to the Galaxy S8, which changed the design methodology of smartphone manufacturers worldwide. What will Samsung have in store with its next flagship? Only time will tell. Watch this space for more!