Xiaomi Mi note 3 which was launched in September is the company’s latest flagship phablet. It packs excellent photography features and now, this device has been given a DxOMark score after series of tests. Before we go into the results, let us look at the detailed specification of its camera. The Xiaomi Mi Note 3 is equipped with a dual rear camera setup which has two 12MP cameras on the back. While the primary camera comes with a wide-angle lens at 27mm, f/1.8 aperture, and optical image stabilization, the secondary shooter is equipped with a 52mm f/2.6 lens which supports 2x optical zoom. Both cameras coupled with phase-detection autofocus and Dual-LED flash delivers acceptable images and videos in low-light conditions. In addition, this smartphone ships with a 16MP selfie snapper. 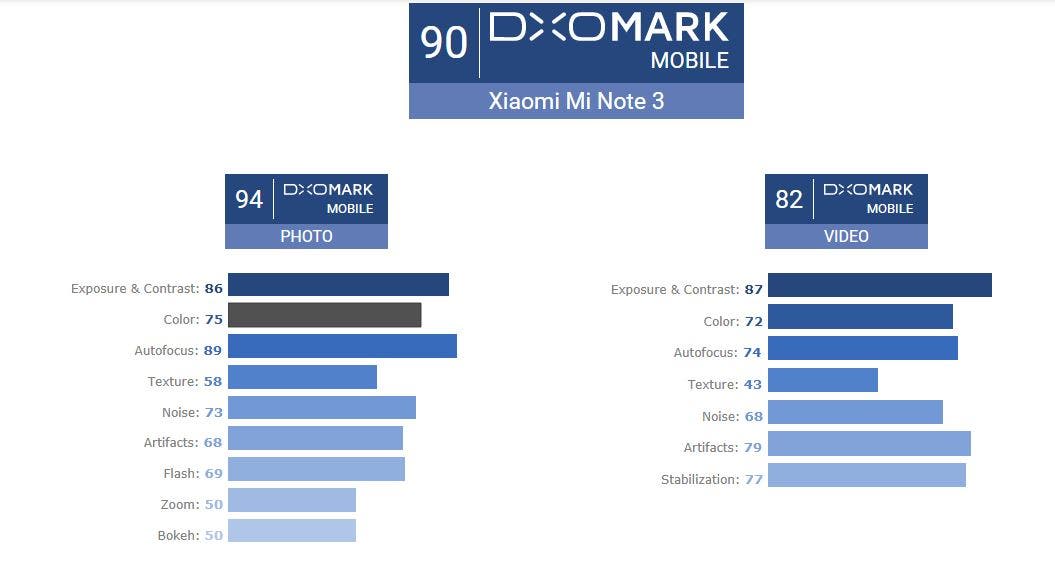 After considering all the nitty-gritty, this smartphone scored 90 points via DxOMark’s benchmarking process. Considering the scores, the video performance is slightly better than the image performance. It claimed 94 points and 82 points for video and image performances respectively. There are some good salient points that are worth mentioning in the scoring process. For images, DxOMark says that the Xiaomi Mi Note 3 has a fast, accurate and repeatable autofocus, good zoom functionality and bokeh effects and much-reduced noise in photos. However, this camera doesn’t perform so well in low light conditions.

On the other hand, the video aspect has its strength accuracy and white balance. Also acceptable are its image stabilization and autofocus. Nevertheless, capturing detail issues, frame drops and variations in image sharpness across multiple frames were the downsides of the Xiaomi Mi Note 3 video. In all of this, this smartphone scores higher than most of its competitors. With a price tag of about $384, it is not entirely the best choice but DxOMark concludes the camera of this phablet gives you a good run for your money.

See more images from DxOMark’s test with its associated comments

Here’s the performance of other devices that passed through DxOMark recently.

Next Apple to acquire Shazam for about $400 Million