Samsung mobile recently unveiled its luxury flip phone — the W2018, at a launch event in China. Apparently, there is still a Samsung device hanging up on the line. The device in question is the Galaxy A8/A8+ (2018) – a device that has been leaked in images and specifications in the last couple of weeks, indicating the handset may launch later this year.

While Samsung has yet to confirm the existence of the Galaxy A8/A8+ (2018), the company has now treated us with what appears to be the last minute leaks/ teaser. The upcoming smartphone’s user manual has reportedly been published on Samsung’s official site. Although the user manual didn’t directly reveal a lot of details regarding the upcoming device, it is a sure confirmation that the Galaxy A8/A8+ is indeed in the making.

The published user manual first reported by Sammobile did cement previous leaks which suggested that the Galaxy 2018 Galaxy A series will come with dual front cameras. The presence of dual front cameras is an indication that the camera app will come with Live Focus feature for selfies. We are currently not sure what megapixel count the dual camera could have, but there are indications that it could be a step down from that of the 2017 Galaxy A series.

While there is currently no info on the display sizes of these devices, the published user manual did indicate that Samsung will introduce the Infinity display with on-screen navigation keys to the 2018 A8 phones. An Always-On Display, as well as LED notification light, are both also making a return.

On the flip side, the user manual did confirm that the Galaxy A8/A8+ 2018 will feature a single rear camera with a LED flash by its side, while a fingerprint scanner sits below it, a similar arrangement is been rumored for the upcoming Galaxy S9. 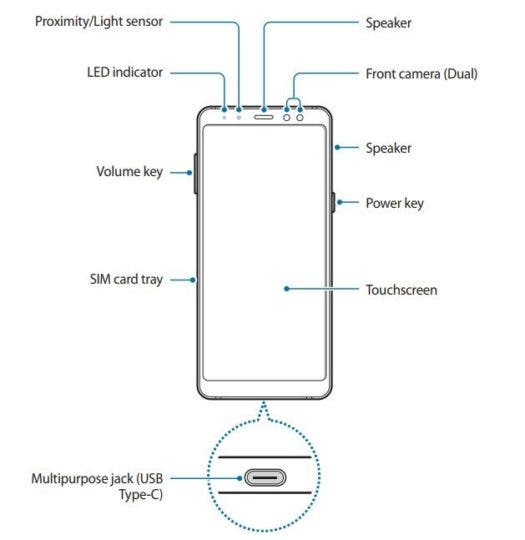 We are not sure when these devices will be unveiled, but considering that the smartphone’s manual has been published, it’s safe to assume that its launch is imminent.