Mobile companies have researched in the last years towards a new technology to replace the need of a physic visible fingerprint sensor over a under-glass placed one. The new technologies would bring a new sea of possibilities for phone makers since the ability to fit the sensor under the display panel could expand screen body ratio without the need to adopt a rear fingerprint placement.

When Apple debuted the iPhone X the choice of dropping Touch ID in favor of Face ID generated a lot of controversies regarding practicality or reliability, however no matter how the US company praises their 3D recognition system, the main excuse for not bringing Touch ID for the Full screen phone was the unavailability of a under-glass technology in time for the release. Apple stubborn and whole philosophy would not allow the company to adopt a rear fingerprint, so the decision of simply lacking it.

The race for in display fingerprint is about to reach their climax on the next year when the first phones sporting the new technology are set to be released. First rumors pointed the Galaxy S9 to bring it, however it may only come in August with Galaxy Note 9, with the next iPhone launch happening only by September 2018, there is only one company remaining that is the strongest candidate to employ the sensor, Vivo.

The first Vivo’s smartphone teasing the technology appeared earlier this year, however in that occasion that technology was only in alpha stage working slowly than most standard sensors. However a whole year later we expect the BBK owned company to have matured their technology enough to debut a smartphone with it and that’s exactly what a leaked teaser from a working Vivo’s prototype suggests.

Read Also:  Apple was the smartphone market leader in the fourth quarter of 2021
Join GizChina on Telegram

According to the reports, the technology adopted by Vivo have been manufactured and developed by the very known Synaptics who also confirmed this in an interview gave to Forbes. The technology already shows a huge progress based in the leaked gif image, however it may get even more refined before a debut in the next Vivo’s flagship. Anyway we are amazed to see the recognition motor working with just a single and sensible tap over the display. 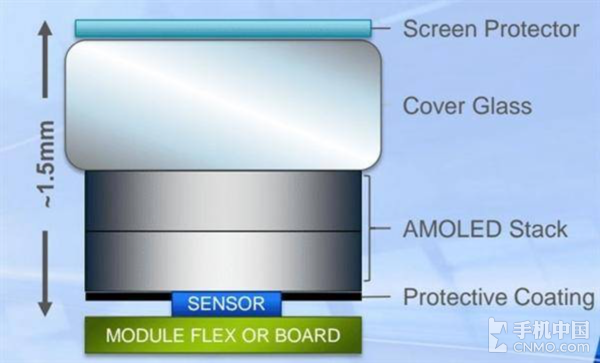 According to recent reports coming from Synaptics the technology is ready for mass production. The under the glass fingerprint works with optical technology utilizing TLC / AES / ECC encryption for the best of security.  According to Forbes report the under display fingerprint sensor activation needs the user to press the handset power button in first place, then users just need to place the signed finger in the print drawing.

The technology is ready and designed for bezel-less OLED Full Screen panels. There is no info regarding of when the first handset sporting Synaptics technology will appear, however we bet in a Q1 launch, and if that is accurate Vivo can become the very first company to inaugurate the new trend.

Half of the world’s population owns a smartphone