The first Honor-line smartphone of Huawei has been launched four years ago on November 21. Thanks to this and the rest of phone lines the company could become one of the top 5 five smartphone makers around the globe. It’s been on this list for three years. Today the company announced a slightly changed variant of its one of the most popular smartphones named the Huawei Honor 9 Youth Edition aka Huawei Honor 9 Lite.

The Huawei Honor 9 Youth Edition is the first quad-camera model of this line. But what’s more interesting this is the next full-screen phone after the Honor Play 7X, Mate 10 (Pro), Honor V10, Nova 2S, Enjoy 7S. But this phone is priced quite affordably making it stand out among others.

As for the features, the Huawei Honor 9 Youth Edition comes with a 5.65-inch full-screen with a resolution of 2160 × 1080 pixels. It is put on a body regularly sporting 5.2-inch screens. So thanks to this technology is provides better ergonomics and larger viewing experience. This unibody uses a second-generation mirror design with a 25% increase in mirror brightness and a 10% increase in sharpness. Both sides of the phone are covered with a 2.5D arc glass with a laser engraved streamer.  At last, there are four color options that took over 6 months to get confirmed after hundreds of tests. They include a seagull gray, charm sea blue, dark night magic, and pearl white.

As we said, this is a quad-camera smartphone using a 13+2MP rear dual-camera with a multi-frame synthesis to support noise reduction as well as with HDR, PDAF phase focus, special food shooting mode, and many more. However, the front shooter uses an identical sensors combination that also supports large aperture, 3D beautify feature (RBI modeling for facial skeleton), bokeh effect at a hardware level, autofocus, gesture support and many more. 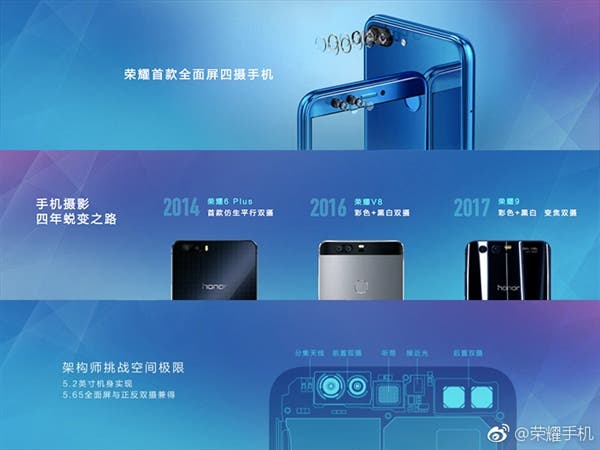 Finally, the Huawei Honor 9 Youth Edition sports a Kirin 659 chip clocked at 2.36GHz, 3000mAh battery, and runs on EMUI8.0 based on Android 8.0. As the company claims, the response speed has been increased by 60%, while the operation fluency speed was increased by 50%. 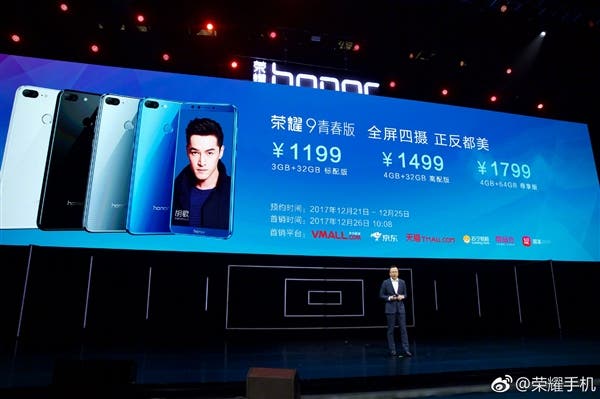