The 18:9 displays can be considered as one of 2017’s big surprise. Since it suddenly appeared and become a hell of trend with many brands pushing their smartphones with the newest aspect ratio. Approximately two years ago we weren’t talking about the possible arrival of a 18:9 screen in a phone, but about the crescent amount of resolution being delivered by the manufacturers each year.

LG debuted the concept with their LG G6 earlier in 2017, a few months later Samsung released the Galaxy S8 and S8+ with the 18:5:9 aspect which translates basically in the same thing. After just a few months, what we expected to be present only in flagships expanded to the mid-range class with the likes of Huawei, Gionee, Vivo and even smaller Chinese brands like Bluboo and Maze entering in the party.

Apparently TCL is about to expand the 18:9 screen availability to the entry-grade in at least one of its device under the Alcatel sub-brand. The Alcatel 3C is a phone scheduled to arrive in the first months of 2018, sporting the 18:9 ratio while being priced at a low rate, considering the specifications. 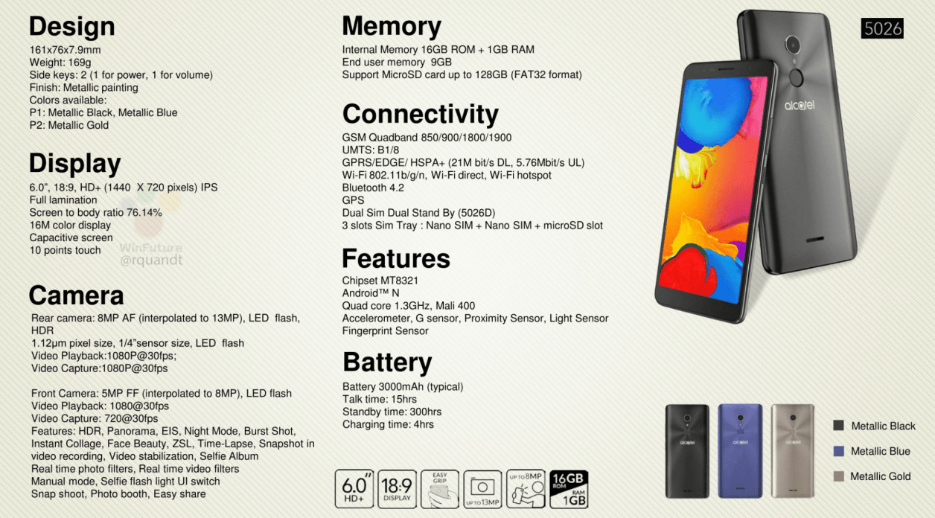 The Alcatel 3C will sport a 6-inch IPS display with a 1440x720p resolution. The processing power is ensured by the MT8321 Quad-core of 1.3Ghz and the old-timer Mali 400 GPU, coupled with only 1GB RAM and 16GB of expandable storage.

Camera wise the handset brings a single 8MP AF sensor interpolated to 13MP, for the selfie enthusiasts there is a 5MP camera interpolated to 8MP.  The Camera interpolation was something very common around some smaller Chinese manufacturers a couple of years ago, but its something rare to see nowadays, apparently the Alcatel 3C will bring back the memories of a day when the amount of Mega-Pixel was more important than the overall quality.

Some nice inclusions are a 3,000mAh battery, Fingerprint Sensor and a Triple-Tray that allow the simultaneously use of Dual SIM and microSD. The two downsides of this handset is the lack of LTE connectivity and the amount of RAM. The Alcatel 3C is expected to hit the shores before the end of Q1 2018 and will sell in Europe with a expected price of 130 Euros.

Previous Nokia 2 will be updated straight to Android 8.1 Oreo