Following series of leaks and rumors, HMD Global is now set to introduce the 2018 iteration of the Nokia 6 smartphone on January 5, as teased by Suning. However, just a few hours ahead of the unveiling, the device has now made an early appearance on the Russia retailer website Suning, where all details and images of the device are revealed.

As per the listing first spotted by Nokiapoweruser,  the device will come with a design similar to that of the Nokia 6 (2017). The device is made of grade 6000 Aluminum unibody chassis with a single rear camera, LED flash and a fingerprint sensor. On the specs front, the website shows the device will come with a 5.5-inch full HD display with onscreen navigation and a front-facing camera above the display. The listing also reveals that the device retains the 16: 9 aspect ratio, a design trend that has in recent times been replaced by the trendy 18:9 aspect ratio. At the heart of the device is Snapdragon 630 processor with 4GB RAM, 32GB and 64GB of expandable storage.

Behind the device, the listing reveals that the Nokia 6 (2018) has a 16-megapixel unit with F2.0 aperture and phase focus; while an 8MP camera with F2.0 aperture sits right above the display. The Nokia 6(2018) camera is equipped with Nokia OZO Surround radio technology, Bothie, and dual vision video recording. 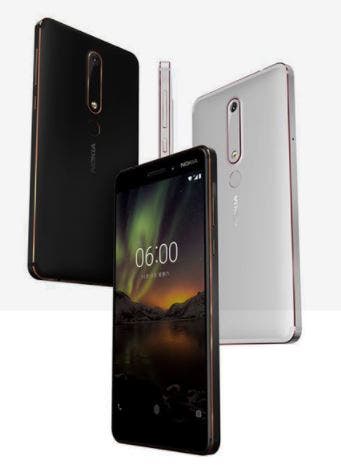 Powered by a 3000mAh battery, the Nokia 6 (2018) is listed with Android 7.1.1 out of the box but will receive the Android Oreo update when it becomes available.

Available in white and black color options only, the device will be made official in China at 191 euro for the 32GB variant, while the 64GB version will cost 216 euros.

Previous Xiaomi Is The First In Terms of Sales Growth