As usual, Google has released the distribution chart for Android devices as at the end of the first week of 2018. Android Oreo occupies 0.7% which is an increase from the 0.5% recorded in December 2017. However, 0.2% of that figure was actually for Android 8.1 (mostly contributed by Pixel and Nexus devices)  which only recently made its way into the chart after meeting up with the lowest benchmark for inclusion. 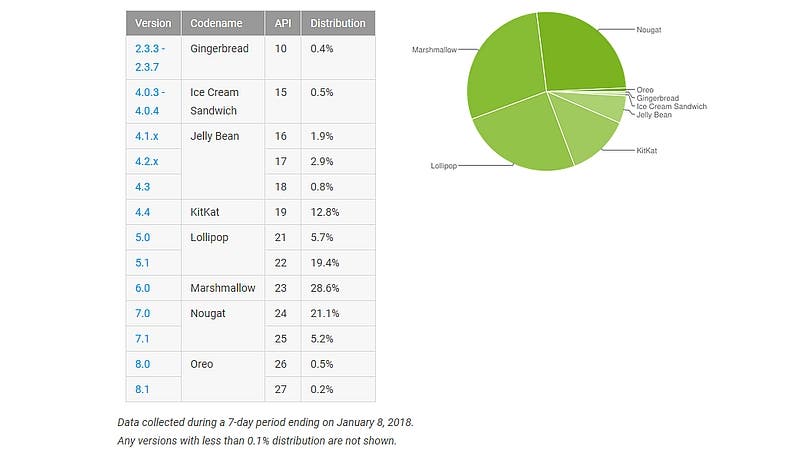 As for Android Marshmallow, it still retains its position as the most used Android OS but its popularity is consistently dropping, and if Android Nougat continues in this trend, it wouldn’t be long before it topples Marshmallow. Android Marshmallow recorded 28.6% which is lower than the 29.7% it registered in December 2017.

Lollipop plunged from 26.3% to 25.1%, and KitKat had to settle for 12.8%, a 0.6% drop from its previous 13.4%. Ancient Android versions like Jelly Bean and Android Gingerbread recorded 5.6% and 0.4% respectively. Both of them experienced a decline relative their December 2017 values. It is quite surprising that Gingerbread is still on the chart because it is seven years old. The emergence of new Android versions leads to the gradual plummet in the market share of older versions.

Next TCL Is Revamping The Alcatel Brand