After apologizing for delaying the highly anticipated Oreo updated for their 2017 flagship, HTC is finally bringing the Android 8.0 version for HTC U11 handsets in Europe and the other countries of EMEA.

According to reports, HTC has chosen today to start rolling out the latest Google OS versions to countries in Europe, Africa, and the Middle East. The update weighs 1,3GB so extra storage will be necessary before attempting to install the newest Google’s cookie. 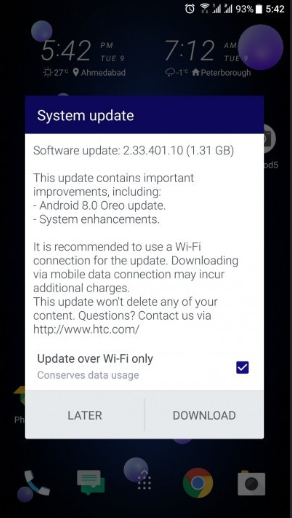 Apart from announcing the update, HTC didn’t disclose further details of what is presented in the referred Oreo version. We already know all the extras brought by the software itself, such as Picture-in-Picture mode, Notifications Channels, and Autofill API. But we are curious to see the goods brought by HTC exclusive software.

We strongly believe that the update brings the Google’s December security patch since the January revision have just been released a few days ago, so we don’t expect that HTC has fastly pushed this new patch to the big update in time for a release.

Currently, the update is going out over the air in an incremental form, so it may take a while until it arrives at all eligible devices inside EMEA. If you didn’t receive the update notification now, wait a little longer and it may appear available.