There’s not been a lot of chatter regarding the Mi Max 3 specs in the recent month. In fact, we just had a detailed spec leak of the large phablet device yesterday, one of very few. However, up till now, there has been no spotting of the actual device in the flesh. That changes with this leaked live image of the gargantuan phone. Who am I kidding? This is a 6.99-inch tablet with phone capabilities. 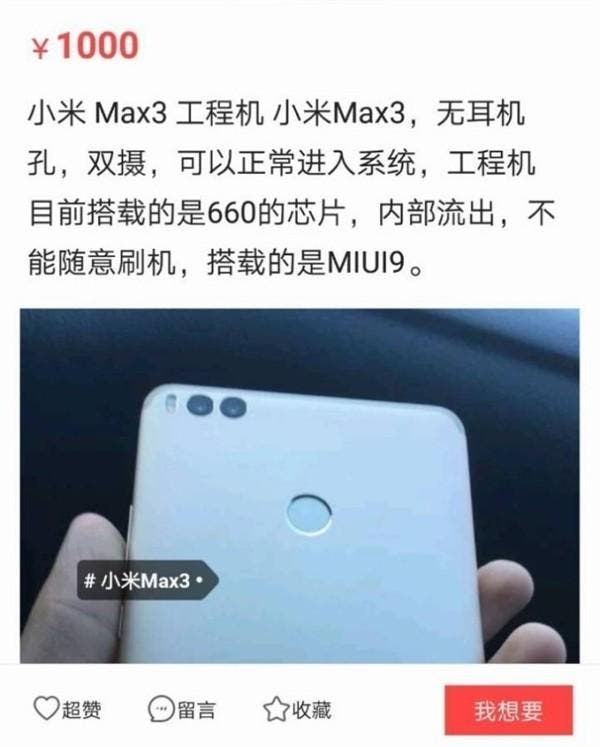 So, the leaked image shows only the back of the device and it has a dual camera system. Curiously, the recent specs leak only mentioned a single 12 MP camera on the back of the phone. This is an area where both rumours are opposite. Which one stands true still remains to be seen. The image doesn’t even show the whole rear of the device, just the upper portion. So, we’re working with very limited info here. Those antenna lines do give us the impression that this might be a legit leak though.

Also, the leak source believes the handset is supposed to come with a Snapdragon 660 SoC, not the Snapdragon 635 contrary to today’s earlier leak. Apart from that, all other rumoured specs remain the same. If all that turns out to be true, the Mi Max 3 will be a 6.99-inch tablet.. er.. phone sporting 18:9 aspect ratio.

With regards to the Snapdragon 660, it’s a premium mid-range SoC from Qualcomm which gets some of the high-end stuff from the Snapdragon 8xx line. Although, very few handsets have actually shipped with this chip in 2017, we expect 2018 to be different. If the Mi Max 3 is also one of them, then we can rest assured, it will be a good performer.