Samsung mobile last month introduced the 2018 iteration o of the Galaxy A series of smartphones with the launch of the Galaxy A8 (2018) and Galaxy A8+ (2018), and while the company is widely expected to unveil the Galaxy S9 and its variants at the upcoming MWC, a new smartphone has today popped up on the popular GFXBenmark site, a possible indication that the Galaxy S9 may not a loner at the MWC.

As per a report on GSMarena, a new phone from Samsung which is alleged to be a member of the affordable J series of Samsung Galaxy phones has surfaced on both the Geekbench and GFXBench sites. Codenamed SM-J720F, the new device is said to be the Samsung Galaxy J8 (2018) – successor to the Galaxy J7 (2017).

It’s also worth noting that the US variant of the Galaxy J7 came with the model number SM-J727, while the variants available in other parts of the Globe in 2016 and 2017 have the model numbers SM-J710F and SM-J730F, so the recently Benchmarked device  (SM-J720F) could be a US bond model.

The GFXBench reveals that the Samsung Galaxy J8 (2018) will sport a 5.5” display with standard aspect ratio and an HD resolution (1280 x 720 pixels), along with 4GB of RAM and 32GB of native storage. The device will house the  Exynos 7885 Octa chipset clocked at 1.6 GHz coupled with Mali G-71 GPU. GFXBench says a 12-megapixel snapper will sit at the back of the device,  while an 8-megapixel camera will sit above the display. The device will be the first Galaxy phone to boot Android Oreo out of the box. 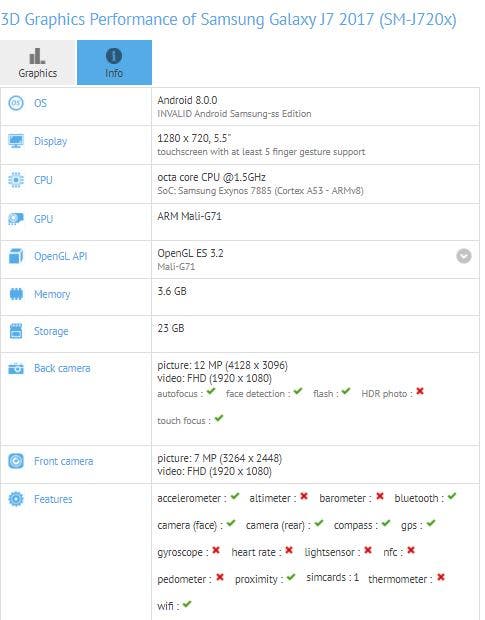 We presently do not have any concrete information on the arrival of the supposed Galaxy J8 (2018).