A new set of reports came today from the popular research company, Canalys. The research evaluates smartphones sales performance during 2017. According to the research, for the first time ever there was a year-to-year decline in Chinese sales, with at least 4% less smartphones being sold in the country.

While the total number of smartphones being shipped in China still is high, the amount of 459 million of smartphones represents a decrease from the nearly 500 million units that were shipped during 2016. Especially when the Chinese market for smartphones never experienced a decrease. 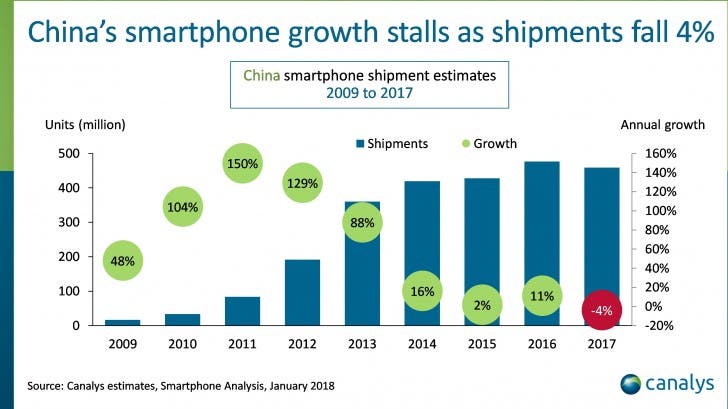 Currently, Huawei sits as the top manufacturer in its own homeland, managing to ship 90 million smartphones during 2017. The company is followed by OPPO, Vivo, Apple, and Xiaomi. During last year Q4, Huawei sold 24 million of smartphones, Oppo sold 19 million, and Vivo managed to ship 17 million of units.

The analysts say that last year, Huawei had the best quarter ever in China, mostly due to the Honor and Nova sub-brands gaining market share that once belonged to some other brands, more specifically, Gionee and Meizu. The Honor performance was so good that also lifted some concerns of a possible cannibalization between Huawei handsets.

2018 will be a year of a lot of work, especially for companies like Meizu. With more players, such as ZTE and Lenovo, joining the game at their home market, a fierce fight should happen between competition and the prize will be Market’s Crown.