Recently, Sony announced it doesn’t expect income from its mobile phones unit, but it will continue making smartphones for strategic reasons. In other words, the Japanese manufacturer should know what’s happening in the market and develop/design corresponding components. Say, the world’s first 4K OLED smartphone is said to be in works. And it’s expected to launch at MWC 2018 in late February. It should be the Sony Xperia XZ Pro. But as you remember, earlier this month Sony was among those rare companies that announced a few new smartphones in face of the Sony Xperia XA2/Ultra and Sony Xperia L2. The latter is an entry-level smartphone who don’t want to pay much but want to own a top brand handset. A few days back we learner it landed on France and Germany. As for today, it’s been officially announced the L2 is available in the UK. 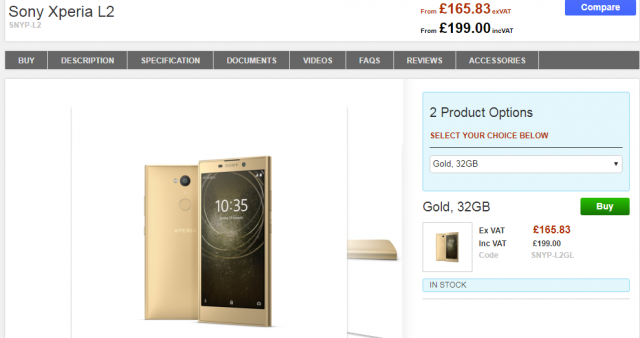 The Sony Xperia L2 is available for purchase at a price tag of 199 pounds. There are two color options to choose from – black and gold. As for the hardware, the L2 is packed with a 5.5-inch 720p resolution screen, MediaTek MTK6737T chip, 3GB of RAM, 32GB of internal storage that can be expanded via microSD card slot, back-mounted fingerprint sensor, 3300mAh battery, and Android 7.1.1.

When talking about a Sony handset, it’s expected to see an incredible camera performance. Actually, the Sony Xperia L2 can’t boast of great camera sensors, but the ones found on it may perform way better than many handsets from the niche. There is a 13MP rear camera and an 8MP front shooter with a 120 degrees wide-angle FOV.

Previous Download: Use Pixel 2 launcher on any Android phone (No root needed)

Next Xiaomi's Mi Box 4 Launching on the 29th of January