Google Pixel smartphones have had a lot of issues in recent times. One of those is the broken multi-touch feature which came as a result of Android 8.1 update. This issue was first identified in December 2017 and since then, there has been no viable solution to the problem. Now, a user who contacted Google took to Google’s issue tracking website to reveal that the company is advising users with this problem to downgrade to Android 8.0 as a temporary fix while it works on the issue. 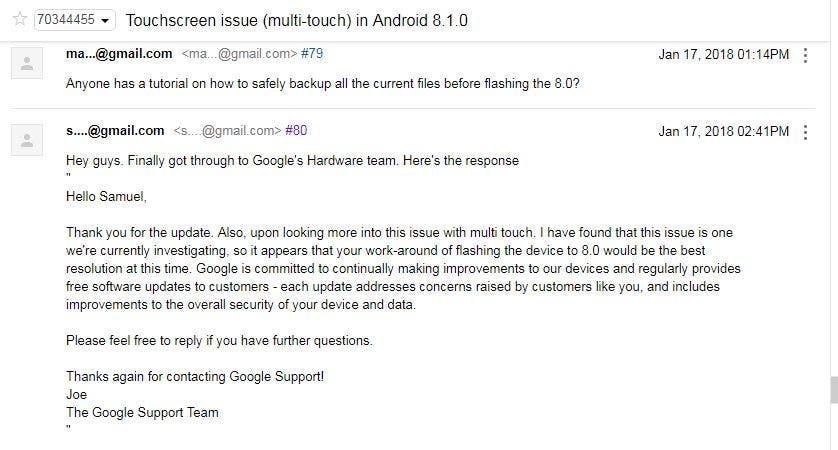 It appears that this problem will not be fixed anytime soon given that Google didn’t give a specific time frame and it’s advising a downgrade as a temporary fix. However, another user said in the same thread that Google gave an assurance that the fix is coming “soon” and that the company advised users to wait for “next updates.”

It is disheartening to note that some Pixel 2 users have opened a thread where there are complaints about swiping/scrolling issues with their units. According to reports, it appears that those units are clumsily discerning scrolls and swipes within apps. See a video below highlighting the issue.

This current swiping/scrolling issue appears to be different from the problem of swipe gestures on the lock screen and during calls which were reported earlier. Nevertheless, we cannot rule out the fact that these problems may be related as they all concern touchscreen and as of now, there is no solution for any of them.

Next Huawei Patents A Unique Back-Hand Gesture For Smartwatches