Smartphones come and go each year but the eternal rumour mill must move on. The Galaxy S9 will come and it is very close and its time the rumour mill moved on to greater things. In this case, the Galaxy S10 (or Galaxy X), if it is named that at all. We’re witnessing the first influx of weak speculation regarding Samsung’s 2019 S series flagship. By the time it arrives, it might even be called something else. But here’s what it may offer next year. 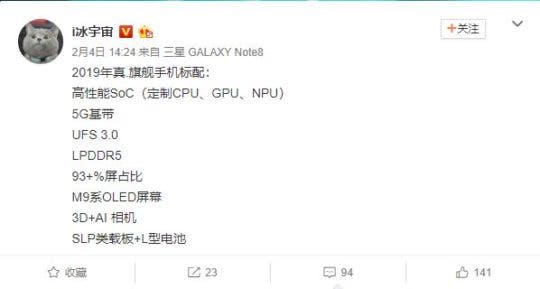 A new leak gives us a very early glance at Sammy’s next great trend-setting flagship. According to info, the Galaxy S10 will sport a whopping 93% + screen-to-body ratio. We know where Samsung will be trimming those bezels, don’t we? The Korean giant will probably annihilate the bottom bezels to make room for more display. This could also mean an in-display fingerprint scanner, in all fairness, it is very likely.

Other important upgrades will be obviously 3D facial recognition and AI. It goes without saying that Samsung will be working hard on its Experience UI to fit current industry trends. And AI will be one of them surely. Moreover, 2019 will see a number of 5G devices as carriers and OEMs push hard to a user the new high-speed era. The Galaxy S10 will be 5G supportive. As for desserts, a better UFS 3.0 and LPDDR5 RAM are speculated to be on board the phone.

One word of caution. Considering how early it is in 2018, this leaked info should be treated with a fair amount of scepticism. We don’t want to jump horses so early.