Users of Huawei Honor 8 Pro in India can now smile as the Chinese tech giant has started rolling out the EMUI 8.0 update after its counterpart in the UK received the same update last week. This is a major update and it comes with the latest Android 8.0 Oreo operating system. This update is 2.81GB in size and it comes with the January security patch in addition to a host of changes including a new navigation dock, app shortcuts, smart tips, AI-based optimizations to performance, 3D panorama mode, and more. The update is now available to download OTA but all units will not receive this update at the same time so you may have to exercise some patience. 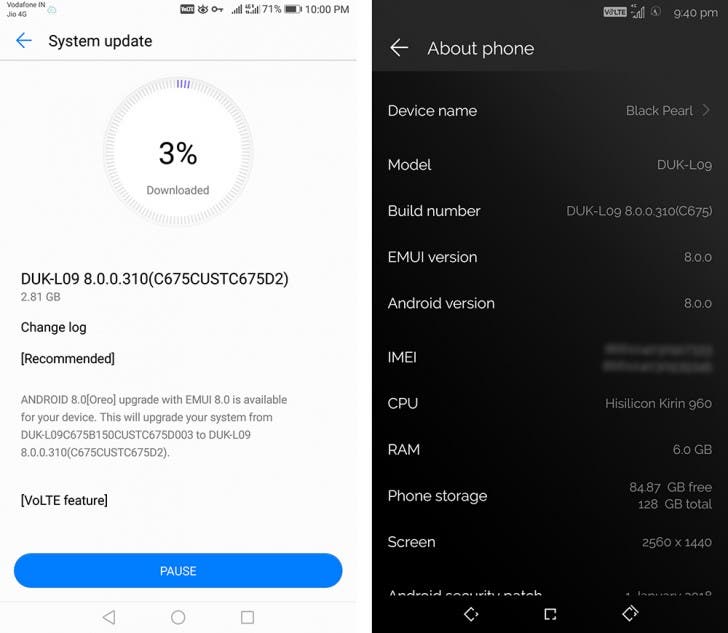 As a reminder, the Huawei Honor 8 Pro is powered by a HiSilicon Kirin 960 processor coupled with 4GB/6GB of RAM and 64GB of internal storage. It is equipped with a Gorilla Glass 3 protected 5.7-inch LTPS IPS LCD capacitive touchscreen having a 73.6% screen-to-body ratio with a 1440 x 2560 pixel resolution. In the camera department, we have a 12MP camera on the rear coupled with an 8MP shooter for selfies. It runs a pre-installed Android Nougat OS (upgraded to Android Oreo) and its lights are kept on by a non-removable Li-Ion 4000 mAh battery.

Next MIUI9.2 OTA Update Pushed Out to Xiaomi Redmi 5A and Mi 5S Plus