HMD Global is probably the only known OEM said to be working on a device powered by the Android Go OS, that is about to change as it appears Asus is also working on launching an Android go powered device soonest.

If our guess is anything to take for it, then the Asus X00RD may be the next smartphone to be powered by the Android Oreo (Go Edition) as the device has now been spotted on the Geekbench site with specs that points toward Android go.

On the performance level, the Asus X00RD scores very low both in the single core and multi-core test, which is not unexpected especially with its entry-level specs. The Asus X00RD seen on the benchmark site is seen running Android 8.1 which Android Go is based on and has 1GB of RAM while it is powered by Qualcomm’s Snapdragon 425 chipset with support for 1280 x 800 HD resolution.

Other specs are scarce at the moment, but we presume the device would be unveiled as a follow up to 2016’s Zenfone Go plus. 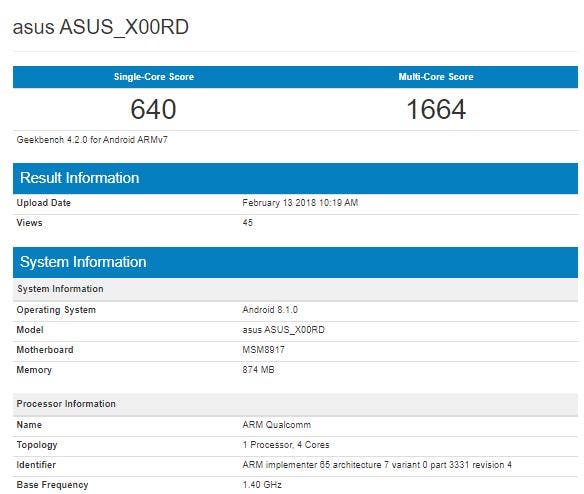 This isn’t  the first time we are hearing about a smartphone sporting Google’s new Android Go OS which is made for phones with up to 1GB of RAM. HMD is rumored to be working on one – the Nokia 1. If the Nokia 1 is unveiled before the purported Android go powered Asus X00RD, the Nokia 1 would end up being the first phone to be launched with lighter OS from Google.