The 9th generation of the Samsung Galaxy S series is set to be unveiled later this month in Barcelona and, of course, the duo will be available in two variants- an SD 845 powered Galaxy S9/S9+ and another with Samsung’s Exynos 9810 version as spotted on GeekBench. Following yesterday’s appearance of the Galaxy S8 Exynos 9810 version on the Geekbench, a Snapdragon 845-powered Galaxy S9+ with 6GB RAM has surfaced on AnTuTu with impressive scores that makes it one of the most powerful smartphone till date.

The Samsung Galaxy S9+ with model number SM-G9650 as seen on AnTuTu pulled a total of 265267 points to floor the Snapdragon 835-powered Galaxy S8+ with 6GB RAM which returned a total of 170641 points on AnTuTu. The Samsung Galaxy S9+ with Exynos 9810 SoC is yet to visit the AnTuTu site, so we are definitely not in a position to comment on the performance of the said variant. 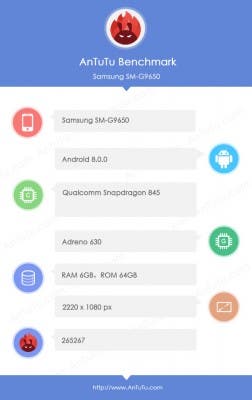 We are quite familiar with the rest of the info revealed by AnTuTu and that include an 18:9 screen with resolution defaulting to 1,080 x 2,220px (of course, that’s set in software, the hardware will be QHD+), Android 8.0 Oreo and 64GB of built-in storage.