You may remember the MIUI vs Android One poll fiasco on Twitter that ended in the Chinese company deleting the post after an unexpected result. Well, apparently OnePlus decided to pinch its Chinese rival.

Szymon Kopeć, the OnePlus Brand Product Manager, posted another poll through its Twitter account allowing users to decide between the OnePlus own modified iteration of Android, OxygenOS or between the most stock Vanilla Android. Just a few time after, excited with the good initial results, OnePlus Co-Founder – Carl Pei decided to answer Szymon Post in a clearly sarcastic allusion to Xiaomi’s Poll. 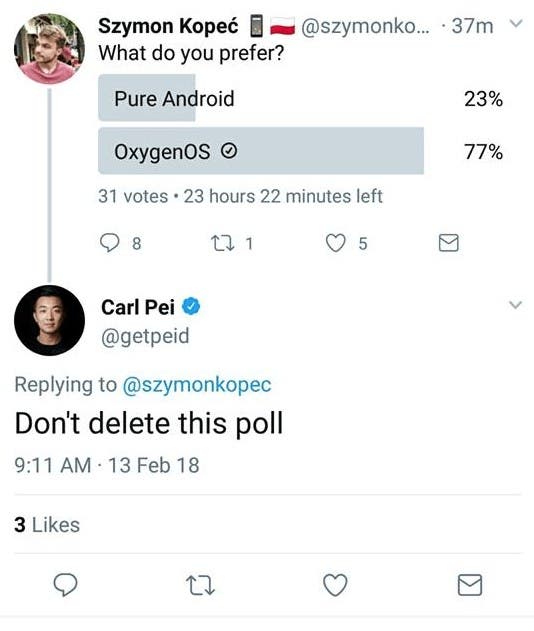 At the time of his comment, the OxygenOS was taking the biggest slice of users preference with about 77% of the votes against 23% of Stock Android. Everything was looking good for OnePlus, but what came after was something unexpected, at least for Mr.Pei.

In a show of Stock Android bandwagon force, the game eventually turned. With 58% of total votes, the Pure android once again took his trophy as the user biggest preference. OxygenOS ended with 42% of the votes, however, OnePlus didn’t take the results to heart in counterpart to Xiaomi.

Thanks for an overwhelming amount of responses. I’ve read all your comments. Appreciate the positive and, especially, negative ones. It motivates us for further work on OxygenOS and helps improving the product. Cheers!

Worth to mention that among Custom ROMs, OxygenOS is the one which brings the closest stock Android experience. However, it adds a ton of useful and new features. Apparently, what makes it stands out from the competition is due to it being close to a pure AOSP build. Lastly, but not least, it’s good to see the company showing some spirit in taking the results as a fuel to improve even more its own software.

Previous Want some discount coupons for things from Cafago e-shop ?