Come Feb 24, Alcatel plans to unleash not one, not two, but three different new smartphones, all of which are expected to debut with a display with 18:9 aspect ratio at different price segments. Two of the three Alcatel phones; the Alcatel 5 and Alcatel 3V have since surfaced on the headlines with their listing on Amazon France, but today, Alcatel USA via a tweet has confirmed that the devices  alongside the Alcatel 1X will be revealed on Feb 24th, a day before Samsung and HMD global will be introducing their 2018 flagships .

The tweet didn’t reveal much apart from the launch date but from the accompanying image and information available on Amazon France pre-order page we already know a lot about the Alcatel 3C and Alcatel 5.

The Alcatel 5 as you can see from the above image will impress the most. It is expected to come with little or no bezels on both sides, the chin, but a chunk of it exist on the forehead. From what we know so far, the device will come with a 5.7-inch full-screen display with 720 x 1440 (HD+)  resolution, an aspect ratio of 18:9 with an octa-core MT6750 chipset clocked at 1.5GHz speed under its hood. Alcatel 5 details and Price here. 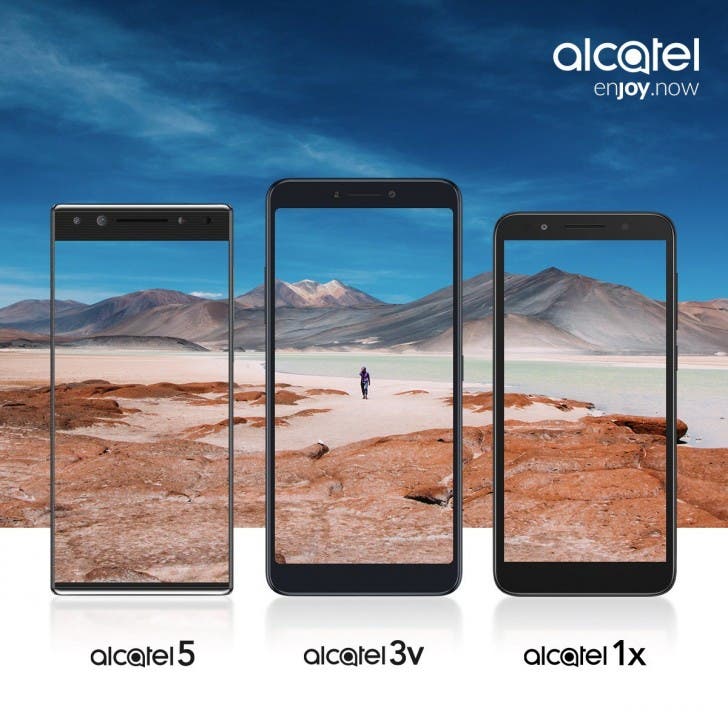 The Alcatel 3V, on the other hand, is meant to cater for the mid-range class, it got a lot of bezels on all sides, but adopts the trendy 18:9 aspect ratio. Available details suggest the device will come with a larger 6-inch FullHD+ 18:9 display, while the processor is an unnamed Quad-core CPU coupled with 2GB of RAM and 128GB of expandable internal storage. The Alcatel 3V rear will be adorned by a 12MP + 2MP dual rear camera. The device will be driven by same 3000mAh battery and will boot same Android Oreo out of the box.

Not much has been revealed about the Alcatel 1X at the moment,  we will update you with more details as soon as the devices are made official

Next After HD renders, live image of Nokia 7 Plus leaks