After receiving some hints from FCC and by Evan Blass, it’s time to get a couple of new tidbits for the upcoming Huawei Y9 (2018). The mid-range smartphone will be the next Huawei bet at the competitive US market, where the company has been experiencing a rough start.

Until the moment, every information that we had about the Y9, was based on speculation. Now we have got our hands on a leak that reveals pretty much of what expect from the upcoming Huawei US contender, in much more consistency. 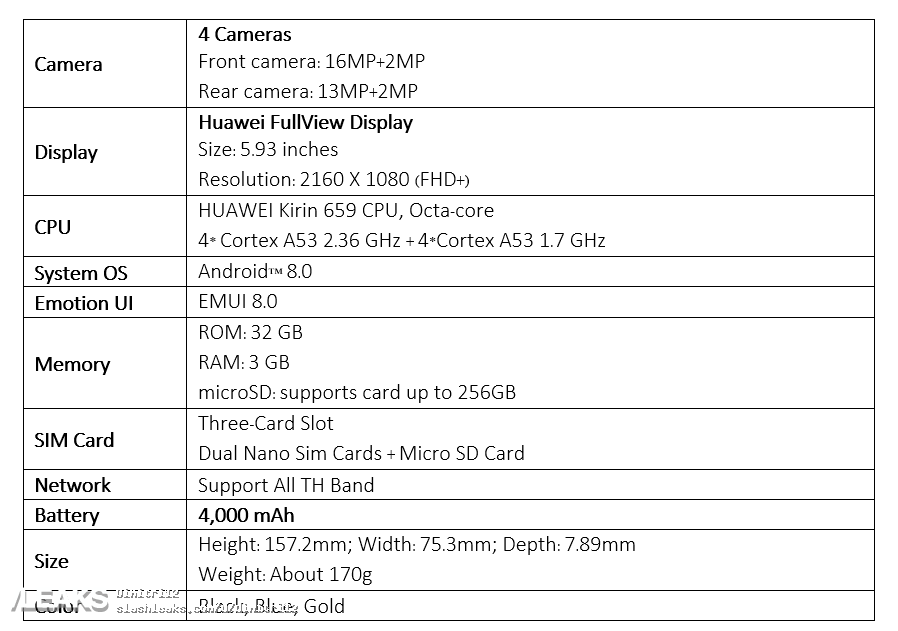 The Huawei Y9 (2018) will be another smartphone from the Chinese Behemoth to jump in the FullScreen trend. It will sport a 5.93-inch display with the resolution of 2160×1080 pixels that results in an 18:9 aspect ratio. The processing power will be ensured by the excellent in-house made Kirin 659 Octa-core CPU mid-range processor paired with 3GB of RAM and 32GB of Storage. The good news is that the Y9 supports storage expansion through the use of a microSD card. This SDcard can be used simultaneously with Two Nano SIM cards, thanks to a triple tray build. Hybrid Slot haters? You’ve got covered by Huawei.

Camera wise the Huawei Y9 (2018) will be another handset from Huawei to pack more than the standard dual cameras. To be more specific, the Y9 will feature a dual setup of 13MP + 2MP cameras on the rear. Selfie lovers will be happy to know that this handset will be a selfie-centric device, thanks to its 16MP + 2MP setup in the front.

All the lights will be kept by a 4,000mAh battery that gets optimized by the strict background policies featured in Android 8.0. As usual EMUI 8.0 will be running atop, but thanks to Project Treble booting an AOSP build on this device will be a piece of cake.

The Huawei Y9 measures 157,2mm x 75.3mm x 7.89mm and weighs about 170g which is amazing considering the handset size and the battery fitted inside. The Y9 will be offered in Gold, Blue, and Black colors. However, one thing that this leak doesn’t disclose is the date when the Y9 will be available in the US. Considering the FCC approval, and how the leaks are surfacing we should consider that a launch is imminent.