Xiaomi has been in the news lately as the rumors surrounding the Xiaomi Mi Mix 2S slated for March 27th unveiling gets hotter. Now, a report from Roland Quandt via Geenbench suggests the company may be releasing a new phone in no distance time following the discovery of a Xiaomi phone named ‘ Xiaomi Berlin’ in the Geekbench database.

This is the first time the device is popping up on the news headlines, and by all indication looks like a code name rather a final name. The device is seen running Android Nougat out of the box and pulled an impressive 1155 and 2738 single-core and multi-core points, respectively.

As per system information, Xiaomi Berlin houses Qualcomm Snapdragon 632 with six cores and a base frequency of 1.02GHz, coupled with 3GB of RAM.  The number of cores, however, seems to be wrong, as the SD 532 has been rumored to be an Octa-core and not a Hexa-core chipset.

The same SD 632 was earlier rumored for the Xiaomi Redmi Note 5, but the chipset till date hasn’t seen the light of the day. There is still no word on when or if the chipset will be released, but we won’t be surprised seeing it unveiled much later in the year, but until then, the Snapdragon 630 and Snapdragon 636, as well as the Snapdragon 625, are capable chipset to meet manufacturers need. 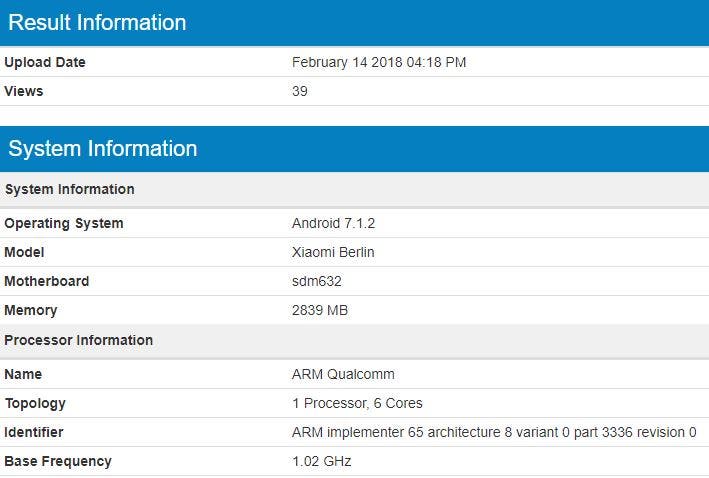 Whether or not the Xiaomi Berlin is a test device that may not see the light of the day remains unknown. Usually, when devices appears on Geekbench, they get launched in about three months, so we can expect the Xiaomi Berlin to become official in due course.