Xiaomi’s Mi Mix 2s is set to be revealed on March 27, as per the company’s invites. But it looks like we might not have to wait that much for some juicy details of the flagship. Xiaomi is holding an event some day next week for the Mi Mix 2s, the company announced on Weibo. 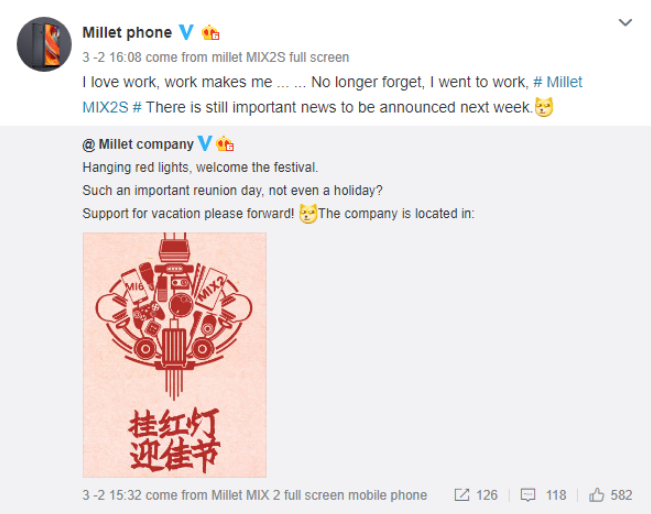 Too bad Xiaomi didn’t hint what it has in store for the event. Also, there’s no date mentioned for the event which means it could happen anytime in the next 7 days. As to what we might expect, Chinese media sources say that Xiaomi might hint at some key features of the device. Most notably, the full-screen design and the in-display fingerprint technology are our best guesses.

The most recent leak suggested that Xiaomi might endow the Mi Mix 2s with an in-screen biometric sensor becoming the second company after Vivo to do so. It would also make the Mi Mix 2s that much more appealing. Besides that. leaked images have shown nearly bezel-less designs that best the Mi Mix 2. Also, Xiaomi has teased the handset with a Snapdragon 845 chip. Hence, we can confirm that it will sport the latest silicone out there.

Prior to this, the Mi 7 has been rumoured to sport an in-display fingerprint reader. As for the other specs of the Mi Mix 2s, speculation is rife that the device might feature a 5.99-inch display with an 8GB + 256GB variant as well.

Previous Comprehensive HTC U12 spec sheet revealed through a leak