Taiwanese consumer electronics company, HTC, seem to be becoming less relevant in the smartphone market. In the recent past, the company is known for unleashing some really expensive smartphones which many users consider as not giving value for money. A Twitter user from Russia, Dmitry Kalinin, who says that he is a project manager for Mobile Products has revealed some details of HTC U12 and the price of this smartphone will boost your adrenaline rush. 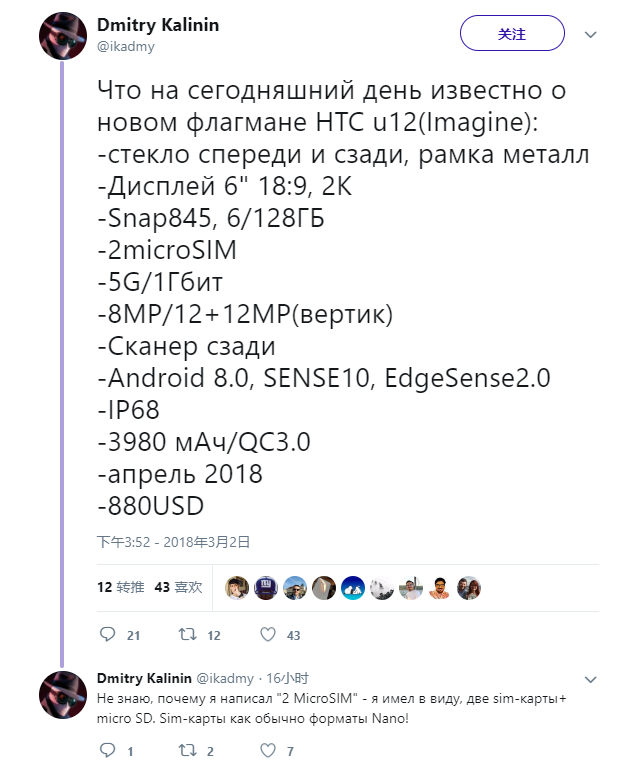 According to the user, the front and rear of this device will come with a glass design and it will be equipped with a  6-inch 2K resolution with an 18:9 aspect ratio. This new flagship will be powered by the recent Snapdragon 845 chipset coupled with 6GB of RAM and 128GB of internal storage. It will run on Android Oreo and the camera department boast of a dual rear camera setup which has a 12MP+12MP vertically arrange rear cameras supported by an 8MP selfie shooter. Other features in this smartphone include dual SIM card + microSD card compatibility, Android 4.0 based Sense (the feature that allows the launching of important apps like the camera by simply squeezing the sides of the phone), IP68 certification (waterproof) and a 3980mAh battery. This leak also revealed that HTC U12 will be released in April and will be priced at about 5581 Yuan ($880). For a company who is trying to find its feet in the global smartphone business, it may not be very healthy to unleash such an expensive device.

There is one tricky detail in this Twitter leak, it says that there is a 5G network which supports 1Gbps. Previously, the prototype of HTC U12 had appeared in a 5G demonstration in Taiwan. At the time, an official claimed that the U12 supports up to 1.2Gbps LTE network (that is, the Snapdragon 845 integrated X20 baseband) Moreover, Snapdragon 845 also does not support 5G.