MediaTek has not lived up to expectation with flagship processors and Qualcomm is clearly ahead of the Taiwanese fabless semiconductor company. However, its mid-range chips are not that bad especially its new boy – Helio P60 which was released at MWC 2018 in Barcelona, Spain. Although, the company has not officially listed the manufacturers to use this chip, reports out of China suggests that three Chinese manufacturing giants – Xiaomi, OPPO, and Meizu are scheduled to sport this chip. We already know (from rumors) that OPPO R15 and Meizu E3 will feature a MediaTek Helio P60 but the Xiaomi smartphone to feature this chip is still unknown. 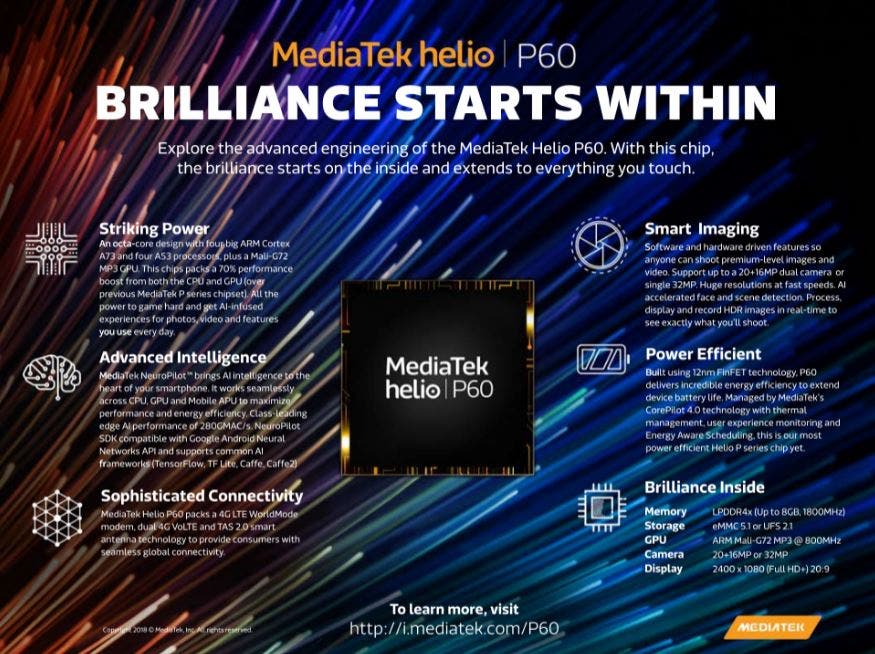 The MediaTek Helio P60 is designed with Edge AI processing which helps devices to act intuitively.  Its hardware supports a camera system with 20MP + 16MP dual camera or 32MP single camera and it also has a power-optimized triple-Image Signal Processor (ISP) system which improves photography. Helio P60 is equipped with CorePilot 4.0 which gives the chip an edge in heavy gaming and multitasking applications. This chip is designed using a 12nm FinFET process and it is equipped with four ARM Cortex-A73 processors clocking 2.0GHz and four ARM A53 processors which also clocks 2.0GHz. Furthermore, it has an ARM Mali-G72 MP3 GPU clocked at up to 800MHz. With this configuration, the Helio P60 gives 70% higher performance than the earlier generation Helio P23 series chipset. Another highlight of this chip is that it comes with much-improved power saving capacity and when compared to Helio P23, P60 delivers up to 12% more power