Xiaomi has introduced the Redmi Note 5 smartphone in China today with some distinguished features. The handset which launched in India first comes with AI Dual cameras as the highlighted feature. Most of the specs of the handset are borrowed from its Indian counterpart but there are some key differences.

There has been some confusion on this but Xiaomi (with the help of Yash Garg solved it) and we now know that the device comes with micro USB port and not USB Type-C.

Today, we launched the Redmi Note 5 in China. Here's how it looks (will hopefully also clear some confusion)! pic.twitter.com/qtluis5mbY

As for the specifications, the Redmi Note 5 features the same display as the Redmi 5 Plus. The processor in the driving seat is the Snapdragon 636 SoC assisted by an Adreno 509 GPU.

But here are the key differences. The Redmi Note 5 rear camera does have the same sensors as the Indian variant. However, the primary 12MP sensor has a f/1.9 aperture whereas the Indian variant has a f/2.2 aperture. The Chinese version also has Dual PD dual-core speed focus for fast autofocus. The rear camera is packed with EIS, HDR, Burst Mode and Panorama. There’s also support for 720p slow-mo videos.

Another big change is the front camera that is of 13MP. The Indian variant has a 20MP selfie shooter. Both the front and rear shooters support AI Portrait modes.

Moreover, Chinese netizens get to play with Android 8.1 Oreo all packed with Treble support. Of course, there’s MIUI as well on top of it. Another difference is dual SIM 4G VoLTE which is not in the Indian version.

The Redmi Note 5 has gestures out of the box, the company announced at launch. It has dual SIM support, 3.5mm jack, Bluetooth 5.0, and hybrid microSD slot.

The Redmi Note 5 has three variants. Refer to the below image for price details. It is available in Black, Blue, Gold and Rose Gold colours. The handset goes on sale on March 20 at 10 AM on the official website. 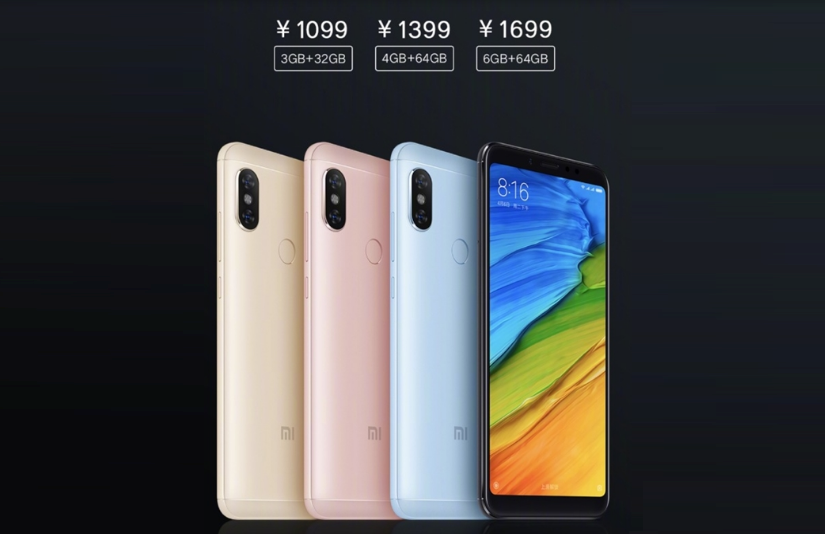