Sales figures of standalone Android-powered tablets have nose-dived significantly in recent years, with only a few manufacturers still trying to make headway. Now, attempts at re-awakening the tablets market have been stepped up a bit with the recent announcement from Google, and Acer, but how far this push will go still remains.

The result of first such attempt aimed at reawakening the tablet market is the Acer Chromebook Tab 10 – a more or less conventional tablet wholely powered by the Chrome OS, making it the first ever tablet to run on the Chrome OS hitherto reserved for premium laptops and convertibles.

Made entirely of aluminum chassis, the Acer Chromebook Tab 10 is aimed at the educational market. It has the build of a conventional Tablet with no physical keyboard, but with pen support, and even comes bundled with one with no extra cost. With Chrome OS and support for Google drive and Google play apps, the Acer Chromebook Tab 10 should come in handy for taking handwritten notes in various apps like OneNote. The device weighs 550g, with 172.2 x 238.2 x 9.98 mm dimensions, and comes fitted with a single rear camera with LED flash, as well as a selfie camera.

In terms of specs, the Acer Chromebook Tab 10, unlike its name suggests, flaunts a 9.7-inch QXGA IPS touch display (2048×1536, 264ppi), and is powered by the OP1 chipset having dual Cortex-A72 cores and quad Cortex-A53 cores, coupled with 4GB of RAM and 32GB of expandable storage. It comes with a 34 Wh cell which the maker says is capable of offering up to 9 hours of battery life, on a single charge. This should give the students room to do some homework before charging it via the USB Type-C 3.1 which also allows you to hook up the device to an external display. 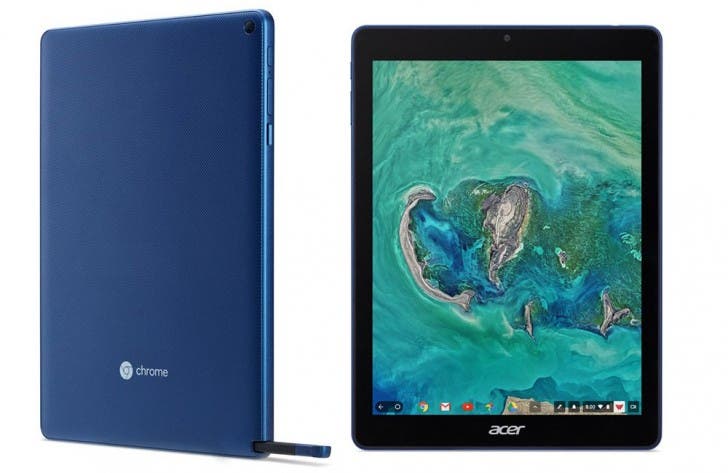 Available in blue color, the Acer Chromebook Tab 10 would go on sale in North America in April for $329, followed by Europe, Africa, and the Middle East for €329 in May.