Motorola is set to add three new members to its Moto E family this year. One of them will be the Moto E5 Play, the most affordable of them all. Despite being in the news for a while, there is still no official launch date of the Moto E5 trio. However, a Moto E5 Play sighting on the Motorola US website gives us hints that the launch date is fast approaching. 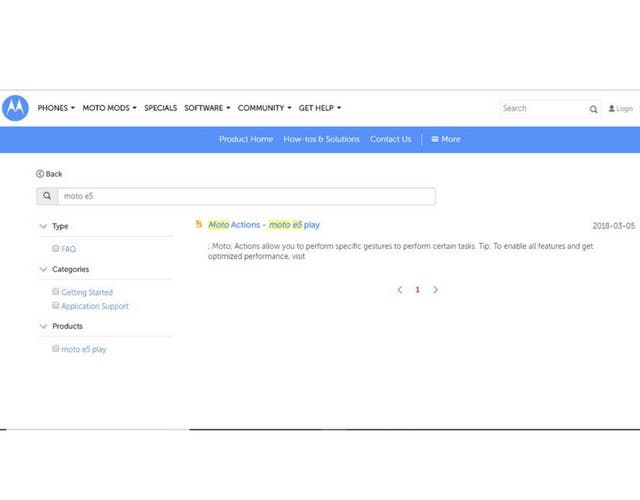 The finding, although doesn’t list the handset itself, it does show a particular feature that will be on the handset. As shown in the image, you can see the search result – ‘Moto Actions – Moto e5 play’. This tells us that Moto Actions or gestures will be present on the handset.

The Moto E5 Play will be a first ‘Play’ variant of the E series as there was only a Plus and a standard variant last year. As per current info, the entry-level will be a bear a much traditional 16:9 aspect ratio. As per renders shared by Evan Blass, the Moto E5 Play will be very similar in looks to the Moto E4. The tipster had also said that the device will launch as Moto E5 Cruise on Verizon and Cricket Wireless in the US.

No launch dates are yet known but popular consensus is that an April 3rd launch is possible.

Next Leaked images of the Xiaomi Mi 7 confirms Notched display