The Japanese Electronics brand, Sharp,  arguably pioneered the current bezel-free trend that has become a must for virtually all range of smartphones, the company has however not been able to leave a strong footprint in the mobile phone industry, probably due to its presence being strongly limited to the Asian World. It now appears as though, the company is on the verge of penetrating the European market with force, as a newly leaked document reveals some Sharp E series smartphones slated to be unveiled soon in the European markets.

On the top echelon of the Sharp smartphones rumored for June unveiling is the one with the model number E-F1. The device major highlight should be its 6.0 inches “Free Form” IGZO display with WQHD+ resolution (3040 x 1440 pixels) trashing the 2960 x 1440  pixel counts of the flagship Galaxy S9 duo.The device has the Essential phone type notch which houses a 16MP front-facing camera, while there appear to be a large enough bezel on the lower chin for a fingerprint sensor. It will be powered by the flagship SD 845 SoC coupled with 4GG of RAM, 64GB of internal storage and will come with a dual rear camera setup consisting of a 22.6-megapixel primary sensor and a secondary 16-megapixel lens.

Next on the line up is the “premier” E-P1, it looks more like a cloned iPhone X, in terms of design, and packs virtually the same internals as the newly unveiled Sharp Aquos S3. It will come with a slightly reduced 5.99-inch Free Form display,  powered by the Qualcomm’s Snapdragon 660 processor coupled with 6GB RAM and 64GB of storage, with a 16-megapixel selfie camera inside the cutout screen, and a dual camera setup at the back.

Next is the high-end device with the codename Sharp E-H1. The device adopts the bezel-free and notched-display trend, but with slightly watered down internals. The display has reduced to a 5.5-inches free-form display and is powered by 2.2GHz octa-core Qualcomm Snapdragon 630 processor coupled with 4GB of RAM, 64GB of expandable storage, single 16MP rear and 20MP front cameras and a reduced 3,020mAh battery.

The Midrange sharp E-M1 will feature a 5.7-inch display with HD+ resolutions, powered by an Octa-core MediaTek MediaTek MT6750T coupled with 3GB of RAM and 32G of expandable storage. The major highlights here will be the 13MP+8MP rear camera and a huge 4000mAh  battery.

On the bottom and the most basic of the lineup is the device codenamed E-L1, it sports the same design and internals as the E-MI, albeit slight variations in the camera, RAM and storage sizes, and a slightly downgraded processor. 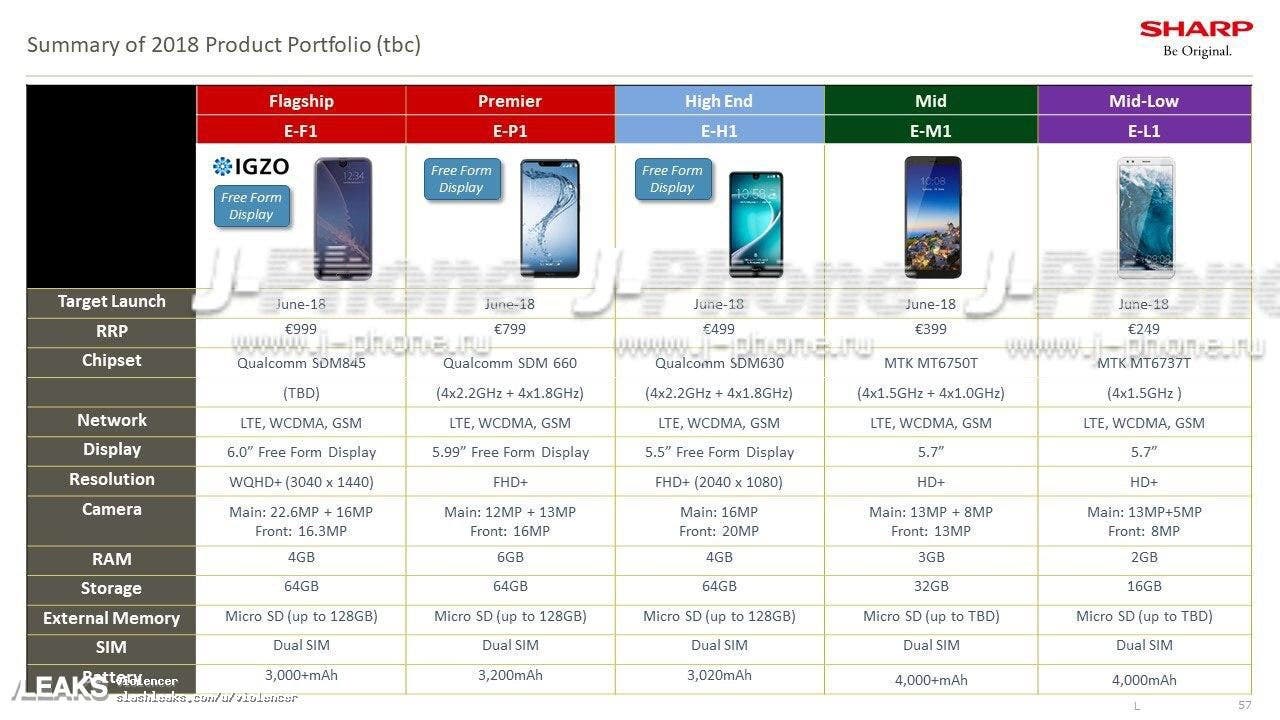