Earlier today, we reported that Xiaomi may be releasing the red version of the Redmi Note 5 soon. Now, we have confirmation that Xiaomi’s International Product and Marketing Director Song Jianing announced that Redmi Note 5 will be released in Indonesia on April 18. This device has already been listed and sold in China. 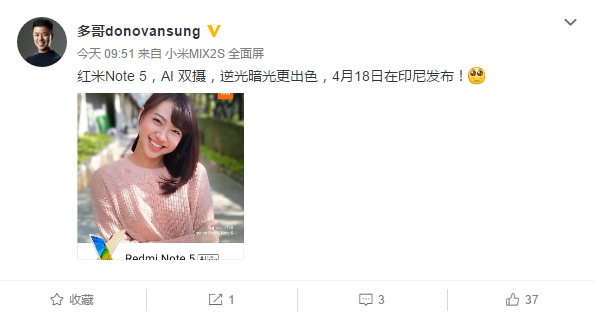 In terms of appearance, the Redmi Note 5 is basically the same as the Redmi 5 Plus. The rear uses the same design as the Redmi 5 Plus with its dual cameras arranged vertically on the left side. As of now, this smartphone is available in black, magic blue, Rose gold and gold colors.

In terms of configuration, the Redmi Note 5 uses a 5.99-inch 2160×1080 display and it is equipped with a Qualcomm Snapdragon 636 processor coupled with 6GB of RAM and 54GB of internal storage. The chip is based on a 14nm process. Its Kryo 260 architecture was used and the GPU is Adreno 509. The performance is extremely powerful with a massive 4000mAh battery capacity. In the camera department, the Redmi Note 5 is equipped with 12MP+5MP dual rear cameras with F/1.9 aperture. The main camera adopts Samsung CMOS and has a 1.4-micron unit pixel area. It supports Dual PD dual-focus and can achieve up to 0.03 seconds.