We know the first Honor-series notebook will make its way on April 19. This is the launch date of the Honor 10 as well. According to the previous leaks and rumors, the Honor MagicBook will come with awesome features concerning both the design and hardware. But the truth is we haven’t seen anything real yet. Today, this laptop became available for pre-order at JingDong. The retailer informs the MagicBook will officially launch at 0:00 on April 23. Unfortunately, no price tag and specs list have been provided yet. 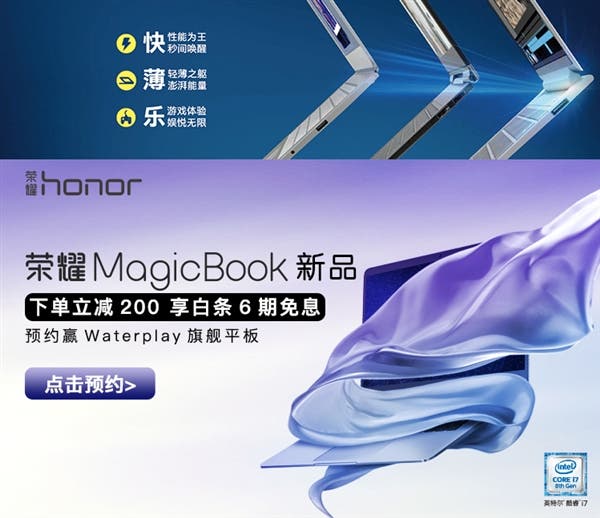 Previously, Huawei has published a poster showing what the most disliked features are of any notebook. They include the weight, the heat, and the short battery life. It was a clear hint at what features the company had worked. Today, the JD’s appointment comes with three highlights ‘quick, thin, and happy.’

Obviously, the word ‘quick’ refers to the performance. We know the Honor MagicBook will be equipped with Intel’s eight-generation Core i5/i7 processor. This is the latest creation of the manufacturer that is capable of providing an excellent performance and has a lot of improvements in comparison to the previous-gen chips.

The second descriptive word refers to the design. According to the official announcements, the Honor MagicBook comes with a slim and thin body. Though we don’t know any certain data concerning the dimensions and weight, it’s assumed the laptop will be using a metal housing and will come with a quite slim housing.

The last word is assumed to refer to the perfect gaming experience provided by the notebook. Many geeks are sure the MagicBook will come with a discrete graphics card.

All these features and hints make us think the Huawei MagicBook will be positioning the Xiaomi Notebook Air series laptops. As you know, they are very popular in China (and worldwide). So with the launch of this laptop, Huawei will make a tough competition to them.

Next Sony Xperia XZ2 Available For Pre-Order in China