The Antutu resultsfor the Meizu 15 Plus are out.

The Meizu 15 is now the hot topic of the Chinese smartphone world. In retrospect, it was pretty smart of Meizu to wait, since now they won’t be overshadowed by Huawei’s P20 launch. Now that the spotlight is on the Meizu 15, people are eager to hear more about it, and more is what we have today. The Antutu results for the Meizu 15 Plus are out, and they’re really quite something.

The big surprise of the list is that the Meizu 15 Plus will run on an Exynos 8895 chipset. For those who don’t keep up with the Exynos numbers, this is the same chipset as the Galaxy S8. Meizu does have a tradition of utilizing Exynos chips in their devices, but this time it’s way more interesting. The Galaxy S8’s chipset is still a massively powerful chip, especially next to the current crop of MediaTek chipsets. I’m looking forward to seeing how the Meizu 15 Plus will turn out, and what the general consensus will be. 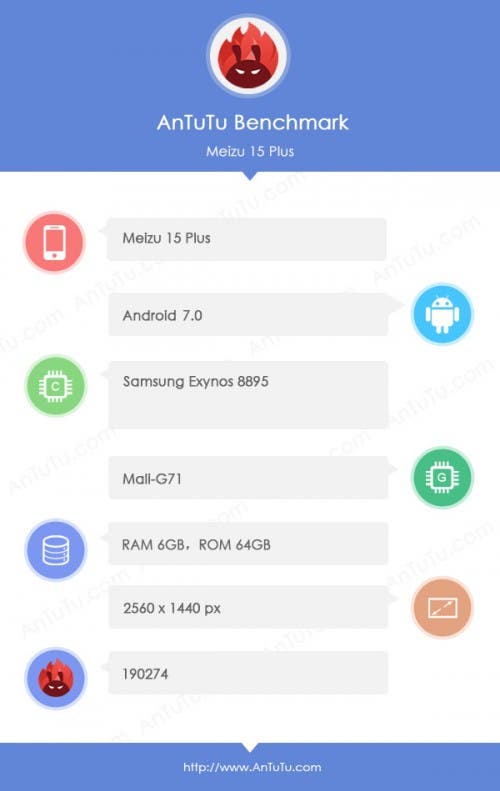 On the other hand, we should also take a nice look at the other specs on the list. Up first, we’ve got a nice and conventional 16:9, 2560x1440p display, a really nice sight after so long. The test unit here has 6GB of RAM and 64GB of internal storage, which is pretty average. The Android version here however is the older 7.0 Nougat, though we assume it has the latest Flyme 7 which compensates somewhat.

Overall, the Meizu 15 Plus is building up to be the most interesting and unique launch of the year. I mean, it’s pretty odd that a conventional display ratio and a Samsung chipset is what makes it stand out, but it does. Maybe it’ll even have a headphone jack. I’m really excited to see the final product, since I feel the Meizu Pro 7 Plus was the most underrated device from last year. If Meizu can pull off another quality flagship, then they’ve got my money this time.

Next OPPO A3 Appears On Geekbench & TENAA With Helio P60 SoC