The LG G7 ThinQ is slated for a 2nd May unveiling which was reveled by LG day before yesterday. The G7 ThinQ has popped up on Geekbench confirming the specs that we already know from the plethora of leaks and rumors. 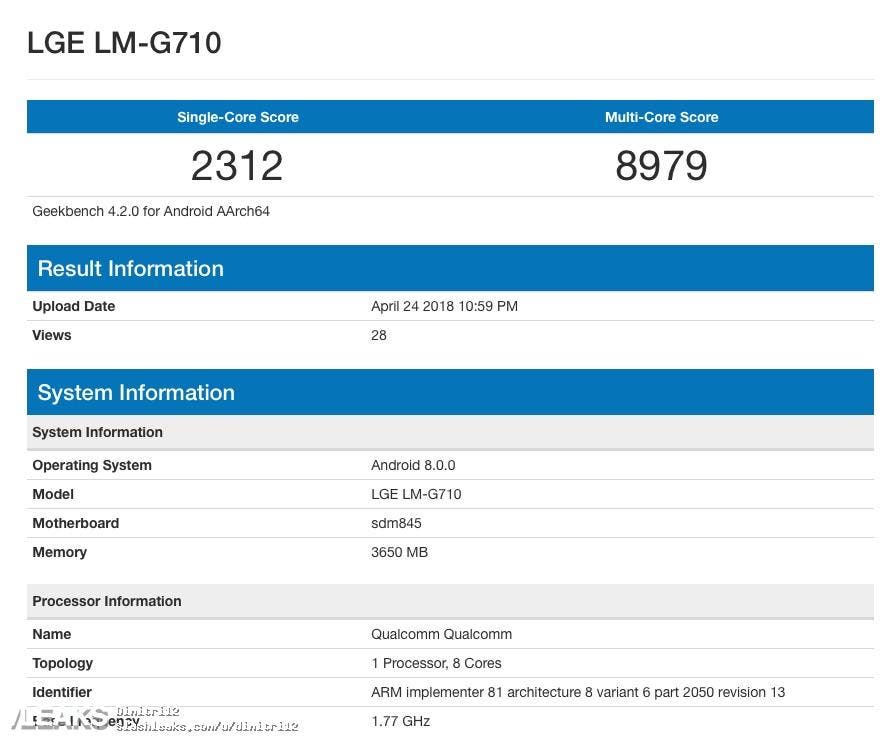 The G7 ThinQ has scored almost similar to every other flagship that sports similar specs, Snapdragon 845, 4GB RAM and Android 8.0.It scored 2312 points in the single core and 8979 points in the multi core tests.

Earlier today, the display details of the G7 ThinQ were revealed by LG. Instead of an OLED display, LG has chosen to go with an LCD display so as to achieve higher screen brightness levels. Referred by LG as the Super Bright Display, the use of LCD will allow it to reach a brightness count of 1000 nits. Meaning, you could easily view the screen even in direct sunlight. Furthermore, LG says that the display will be 30% more efficient as compared to the G6 along with 100% DCI-P3 color coverage. This will allow for up to six different colour screen modes.

LG also confirmed that there will be an option to hide the notch on the G7. From what we know till now, the LG G7 ThinQ will feature a 6.1-inch display with a 19:5:9 aspect ratio, Qualcomm Snapdragon 845 coupled with 4GB RAM and Android 8.0 Oreo.

Next OUKITEL launches another brand sale, prices start at $69.74