As we inch closer to the May 2 launch date of the LG G7 ThinQ, LG mobile has decided to lend its voice to the rumors and leaks that have been trickling in for close to a month now. The company via its LG social blog has confirmed a few details of the upcoming device.

First off, LG mobile via the latest press release confirms that the LG G7 ThinQ instead of an OLED panel will use an LCD display technology. The choice of the LCD over OLED display according to LG is to enable it to achieve a Super Bright Display and peak brightness of 1,000 nits. This brightness of 1,000 nits will allow you use the LG G7 ThinQ under direct sunlight hassle free. This isn’t groundbreaking, though, as the flagship Galaxy S9 and S9 Plus already surpassed that figure with its 1,1000 nits.

The display which LG refers to as the Super bright display is said to be very energy efficient, as it reduces power consumption by as much as 30% compared to the LG G6. It is also said to offer 100% DCI-P3 color coverage with up to six screen color modes — Auto, Eco, Cinema, Sports, Game and Expert modes that can be toggled automatically depending on the video content.

While we already know through official-looking render that the G7 ThinQ display will have the dreaded notch, LG today confirmed that there will be an option to hide the notch, like we have it on the Huawei P20 and the upcoming OnePlus 6.The LG G7 ThinQ will come fitted with a display size slightly larger than the one on the G6. With a 6.1-inch screen with bezel-free design, the device will have a 19.5:9 aspect ratio and QuadHD+ resolution. 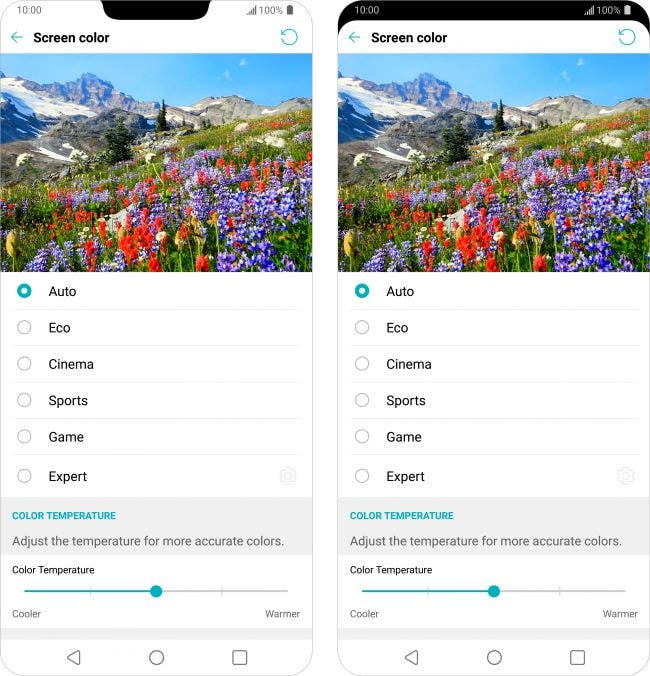 More of the upcoming LG G7 ThinQ will be unleashed on May 2, when it will be made official.