The Galaxy S9 and S9+ were both announced prior to the last MWC 2018, and while these devices are just beginning to arrive the hands of those who first pre-ordered the devices, a new report reaching us says the company is already rolling out a new software update to these devices, that might pop up once it is turned on.

Though not a major update, the update which is currently rolling out in Germany brings the March security fixes which include both Google’s general March update for Android and Samsung’s customs update. Though not specific on the changelog, the new update is aimed at enhancing the performance, stability, and security of the latest flagship offering from Samsung.

The security patch comes in the form of OTA update, it measures about 242MB and comes with G960FXXU1ARC5 and G965FXXU1ARC5 build numbers for the Galaxy S9 and S9+ respectively. If you have received your pre-ordered Galaxy S9, you should be automatically prompted with the update, otherwise, you should navigate to the device’s Settings → About Phone and check for the system update manually from there.

We have only received reports of the update from users in Germany, but it should be rolled out gradually to other countries in the days to come. 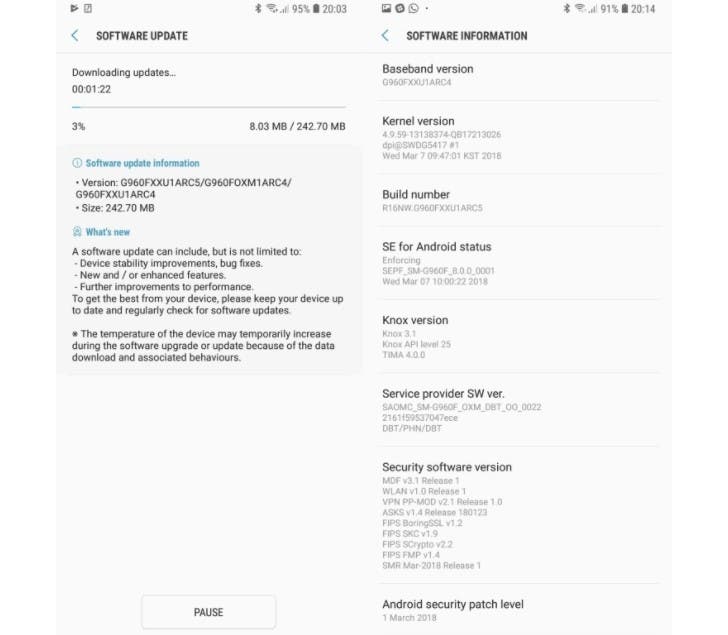 The Galaxy S9 duo officially opened for pre-order on March 2nd and was scheduled for March 16 release date around the world, but a couple of retailers and carriers have already started shipping stock.