Just ahead of the Galaxy unpack event at the MWC 2018, LG has today introduced an iterative upgrade to last years LG V30. The new Smartphone dubbed the LG V30s ThinQ is probably LG’s biggest launch at this year’s MWC. Every OEMs are talking about AI, and LG can’t afford to be left out, so it has introduced the LG V30s ThnQ. The LG V30s ThinQ is basically the same as the 2017 LG V30, but now with slightly improved internal and focused on AI.

The V30S is LG’s first attempt at breaking away from releasing flagship devices on annual basis, it has decided to go with releasing minor upgrades to such flagships instead.

Like we said before, the LG V30S is virtually the same as the V30. It has the same external makeup, but for the new “Platinum Gray” color option. It flaunts the same 6-inch FullView OLED Display, same  Snapdragon 835 chipset as well as the same 3300mAh battery. Minor differences, however, exist in RAM and memory sizes, LG has stepped up the V30S RAM size to 6GB from 4GB with two more storage options of 128GB or 256GB.

The V30S retains the dual-lens camera set up of the base V30, and that includes a 16 MP primary camera coupled with a 13-megapixel wide-angle lens, while a 5MP camera sits above the display.

What else differentiates the regular V30 and the V30S you may ask? well, the differences are just minute. The ThinQ moniker is the real deal here, the V30S got some built-in AI features including wake-up commands, AI shooting modes and more. AI can also enhance your camera with a “bright mode” that enhances low-light photography.

Similar to Google lens, the ThinQ also include QLens, which can recognize an image like a wristwatch and find information like price and where to buy one. There V30S also include a Korean-language voice assistant called Qvoice. LG did mention that some of these AI features will get to older devices in form of updates.

We are yet to get details about the global rollout of the LG V30S ThinQ, but we know it will first go on sale in Korea in the following weeks. Pricing will be made known later. 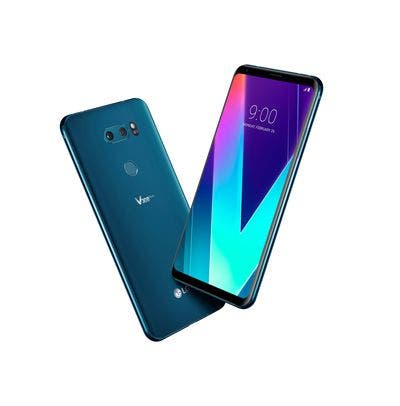 Previous Refurbished Nokia 8110 To Get A Rear Camera & 4G Network