Back in December 2017, Microsoft filled a couple of patents related to a foldable tablet that apparently would be able to convert itself into a compact mobile product. Those patents reached the Microsoft’s enthusiasts like a big boom in their hearts since a great part of them are still waiting for a revolutionary Surface Phone, that could be used in multiple modes, such as a tablet mode, laptop mode, tent mode and folded mode.

This previous concept seems to be part of a Microsoft project called “Andromeda” that would bring a foldable device with unique capabilities and style. Today a new set of fresh patent applications surfaced through the web, revealing some additional details about this mythical unreleased device.

One patent seems to bring a solution for all the issues created when a device with two displays is connected by a ringe in the middle. For this particular case, Microsoft states that conventional gestures and solutions applied by other manufacturers will not work, instead, it would make some users frustrated with an unpractical device. According to the US company, their solution will make use of different type of inputs that will take in account the orientation of the handset, the position of the hinge and how the user will be holding the product during usage. 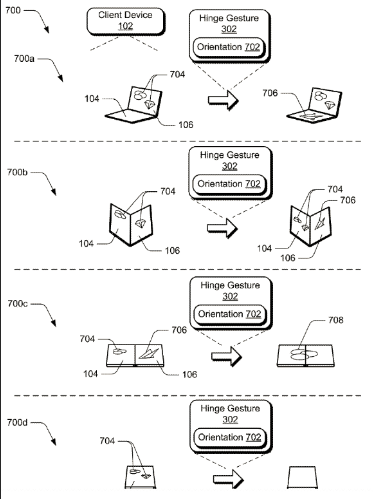 The second patent application, labeled as US 2018/0113241 A1, mentions a method to keep the device looking flat even if the two screens are curved. According to Microsoft, through the use of an “image-correcting layer,” the device will be able to create an illusion of a standing flat view, even if the user curves the two displays in the handset.

The concept of a foldable dual-screen device is something that Microsoft has been developing for quite some years, however, it only gained form in the recent years with the advancement of the technology. The launch of such handset would be really good for Microsoft, especially during this moment when the company seems to be just watching competition through the mobile scenario. Having killed its lacking Mobile Os and without a good device to compete with the other giants in the segment, the company really needs to bring something innovative.