The official website of the Google Android OS has two new smartphones from Japanese Multinational Corporation – Sharp listed giving us a brief insight of their specifications, as well as renders of the smartphones’ front panel. Listed as the Sharp SH-A01 and Sharp A2 Mini, both devices share similar specs, designs and both oddly run the Google Android Nougat out of the box.

The Sharp SH-A01 sports a 5.7-inch display with 18: 9 aspect ratio and unknown resolutions. The processor is not mentioned here, but the device is listed as running the old fashioned Android 7.0 Nougat out of the box with 4GB RAM and 64GB ROM, but we couldn’t ascertain whether or not it supports memory expansion using a microSD card. While the specs sheet indicates the device sports a fingerprint sensor and lacks support for NFC, there is no visible fingerprint sensor located on the bottom bezels a seen below, so we assume that might be located at the rear of the device together with the rear camera sensor.

Other details including the camera information, battery capacity, and the processor were not mentioned.

Sharp A2 mini sports virtually the same designs as with the Sharp SH-A01, but unlike the Sharp SH-A01, the A2 mini appears to sport a dedicated front-facing flash. It also lacks the fingerprint sensor as well as support for NFC. It runs on Google Android 7.0 Nougat, with same a 5.7-inch display, 2GB RAM and 16GB of storage. 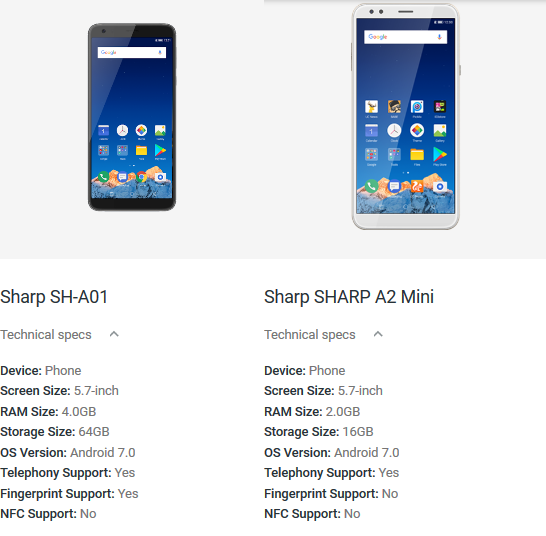 Other specs, features and release date are not known at the moment, but the release date might not be far off having been listed on the Android Enterprise Device Catalog.