AnTuTu regularly comes in with reports showing the highest rated smartphones running on both iOS and Android. Last time, we got acquainted with such a list was back in January, when the benchmark software published the lists of the highest rated iOS and Android smartphones of 2017. Now, we can take a look at the lists for March. Just note these lists refer to the Chinese market only.

Actually, top lists of this or that product help consumers to make decisions when looking for a new device to buy. In this sense, the highest rated smartphones lists should be very helpful. According to the reports made for March, the iPhone 6S Plus continues to be the most beloved iOS phone, while the list is led by the Meizu Pro 6 Plus for Android devices.

As we can see, all the rates of the iPhone models are above 96%. This simply means the Apple fans are satisfied with the devices the Cupertino-based company comes with. Recently, we have been talking about a survey that was conducted to find out whether the iPhone X users like their devices or not. Surprisingly, 97% of all respondents answered they are either ‘very satisfied’ or ‘satisfied’ with the iPhone X. So the results show in the chart shouldn’t be surprising. The highest place is occupied by the iPhone 6S Plus that has a 98% of consumers rate. The iPhone 6s, iPhone 7, iPhone 6, iPhone 8, and iPhone 7 Plus have a favorable rate of 97%, while the iPhone 8 Plus, iPhone 6 Plus and iPhone X have 96% rate. 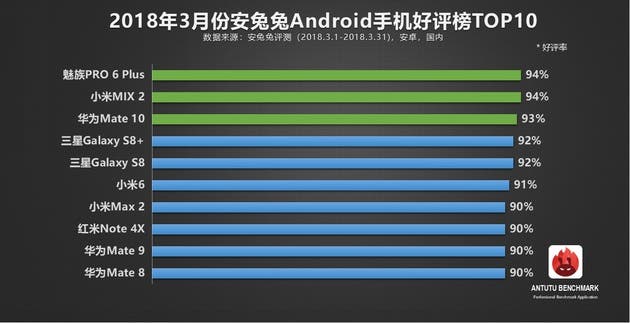 The Meizu Pro 6 Plus and Xiaomi Mi MIX 2 have the same rate of 94%. The first thing we can write down is the way lower consumer satisfaction rating in comparison to the iPhone models. Anyway, they are followed by the newly announced Huawei Mate 10 that has a rate of 93%. The second thing we should pay attention to is that Huawei has only three models in the list, while Xiaomi has 4 models.

At last, we should note the OnePlus 3 and OnePlus 5 that have been leading the list of 2017 are not present at the list of March 2018. This is mainly related to the fact both models have been discontinued on the official website. At this moment, the OnePlus 5T has 82% rate and enters the top 30.