Starting the day when the iPhone X was out various speculations concerning this device don’t stop. Some say the Cupertino-based company didn’t come with innovations as many Apple fans think. The rest say it’s the first top-branded phone with a full-screen and face recognition option. Moreover, the net is buzzing about the demand and sales of this handset. In mid-December, Wall Street analysts were claiming the iPhone X sales are below expectations. But Apple reported the Q4 2017 market share raised by 17% thanks to the iPhone X. At last, a month back, we heard the manufacturer is going to slash the iPhone X production for the Q2 2018. So where is the truth? Seems a Survey conducted by research firm Creative Strategies discloses whether the iPhone X owners are satisfied with their devices. 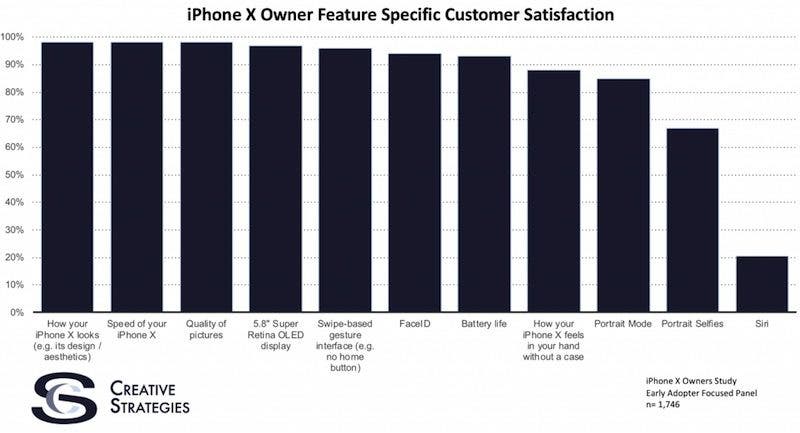 According to the survey, 85% of all respondents (1746 to be exact) said they are “very satisfied” with the iPhone X. 12% of them were ‘satisfied’, while 3% were unsatisfied to various degrees and by some reasons. It turns out 97% of the iPhone X users are satisfied with their devices. This is the highest satisfaction rate we have seen for the iPhone. But it’s not the highest rate if taking into account all Apple products. Back in 2015, the original Apple Watch had the same customer satisfaction rate. On the other hand, only 66% of the users were very satisfied with it.

The survey also reveals which features of the iPhone X stand out. Among them, the Face ID and battery life are on the top (90%). But Siri’s satisfaction rate is 20%, which is too low. It’s rumored Siri has become a “major problem” within Apple. But the company responded to it saying Siri is ‘the world’s most popular voice assistant’.

‘We have made significant advances in Siri performance, scalability and reliability and have applied the latest machine learning techniques to create a more natural voice and more proactive features. We continue to invest deeply in machine learning and artificial intelligence to continually improve the quality of answers Siri provides and the breadth of questions Siri can respond to.’

Previous Sony Xperia XZ2 Has Gone On Sale At 5999 Yuan