After appearing in benchmarks, the Galaxy Tab S4 has now cleared one of its legal hurdles today. The flagship tablet was spotted passing the Wi-Fi certification test at Wi-Fi Alliance with model number SM-T835.

Looking at the certification, the Galaxy Tab S3 successor is clearly running Android Oreo which isn’t much of a surprise. As far as WiFi tests go, we don’t get much info out of it. However, we’ve had a brief encounter with the Galaxy Tab S4 in a GFXBenchtest. It reported the same SM-T835 model to feature a 2560 x 1600 resolution on a 10.5-inch screen. Moreover, an HTML5 test revealed the aspect ratio to be 16:10 which is much more convenient for movies and stuff. Apparently, the Tab S3 and S2 had a 4:3 aspect ratio. 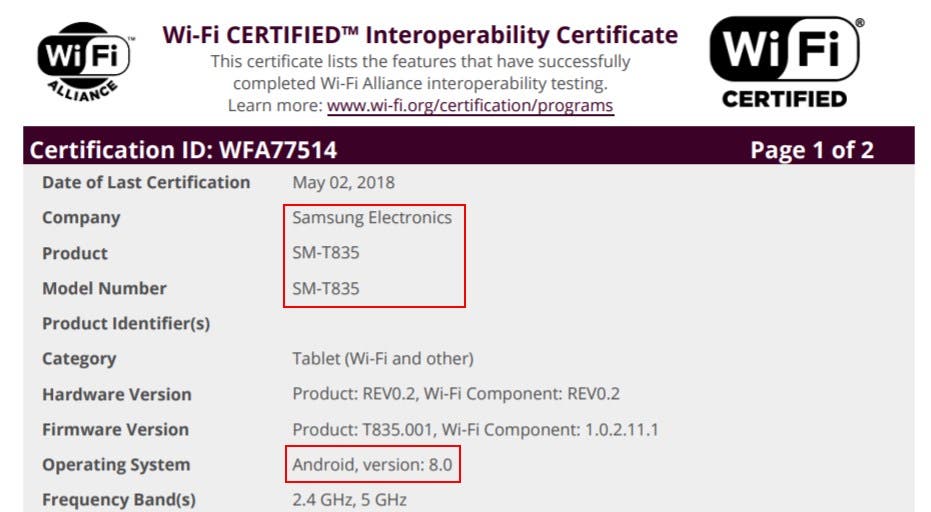 As for the driving processor, expect the Galaxy Tab S4 to boast a Snapdragon 835 SoC with no less than 4GB of RAM. According to sources, we can also expect some sort of stereo speakers like the one with the AKG branding. However, whether we’ll see an S-Pen or not is still not known.

Obviously, the Galaxy Tab S4 being a flagship tablet will not be light on your pocket. This variant which is suggested to be a WiFi-only version could cost as much as € 650 – € 700. According to Galaxyclub.nl, there’s a 4G variant as well that has model number SM-T830.

There’s still no official confirmation on the release date of the tablet from Samsung but at least we can be sure it’s coming.