The tablets market is not attractive to many manufacturers anymore. Only a few of them are working on new models. Seems Samsung is on the list. In 2017, the Samsung Galaxy Tab S3 was launched at MWC. Its LTE variant had a model number of SM-T825. Today a new product with a model number of SM-T835 leaked on GFXBench. So there is every reason to think this is the upcoming Samsung Galaxy Tab S4. 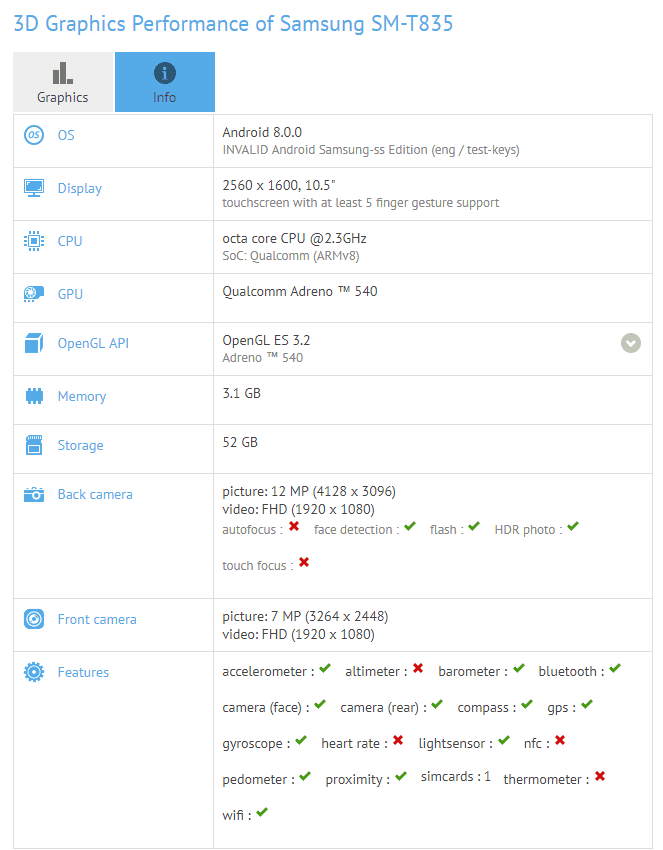 The GFXBench listing showcases the Samsung Galaxy Tab S4 sports a 1035-inch Super AMOLED touchscreen with a resolution of 2560 x 1600 pixels. Under the hood, it carries an octa-core chip clocked at 2.3GHz and an Adreno 540 graphics. This is a clear hint at the Snapdragon 835 chip. The latter is paired with a 4GB RAM and a 64GB of internal storage. The tablet also comes with a 12MP rear-mounted camera sensor, while an 8MP camera is on the front for taking selfies. Of course, it will come with Android 8.0 Oreo pre-installed. All these features suggest the Samsung Galaxy Tab S4 will be the company’s most powerful tablet.

This is the whole information we can squeeze from the leaked document. So the rest will be assumptions. Say, we can think there will be a WiFi version like its predecessors. Plus, it’s assumed to come with AKG tuned speakers, S Pen stylus, and keyboard.

Last year, the South Korean manufacturer decided to unveil the Galaxy Tab S3 and Galaxy Book 2-in-1 hybrid at MWC 2017. Thus its annual flagships in face of the Samsung Galaxy S8 and S8 Plus were announced at an independent event. As for this year, we know the upcoming Samsung Galaxy S9/S9+ are going to be in the spotlight at MWC 2018. This makes us think the Samsung Galaxy Tab S4 won’t be uncovered at the same event not to be overshadowed. So the closest launch date of this tablet should be sometime in spring.

Don’t want to overpay for Samsung Tab S4 ? Replace it with ALLDOCUBE X !