Xiaomi entered the smart cleaners market only recently. It launched the first-gen Xiaomi Mi Robot Vacuum Cleaner in September 2016. Actually, this became one of the most-selling vacuum cleaners in the domestic market. A year later, one of the Xiaomi sub-brands released the second-gen Xiaomi vacuum cleaner. It was named the Roborock Sweep One. Finally, almost a month ago the company announced its second independent brand and launched the Xiaowa Smart Cleaner Youth Edition. The latter comes with all the features found on the high-end smart cleaners. But as the name suggests, it is priced way lower at 999 yuan ($158). Today, the company announced it is going to launch a new robot vacuum cleaner on May 8. 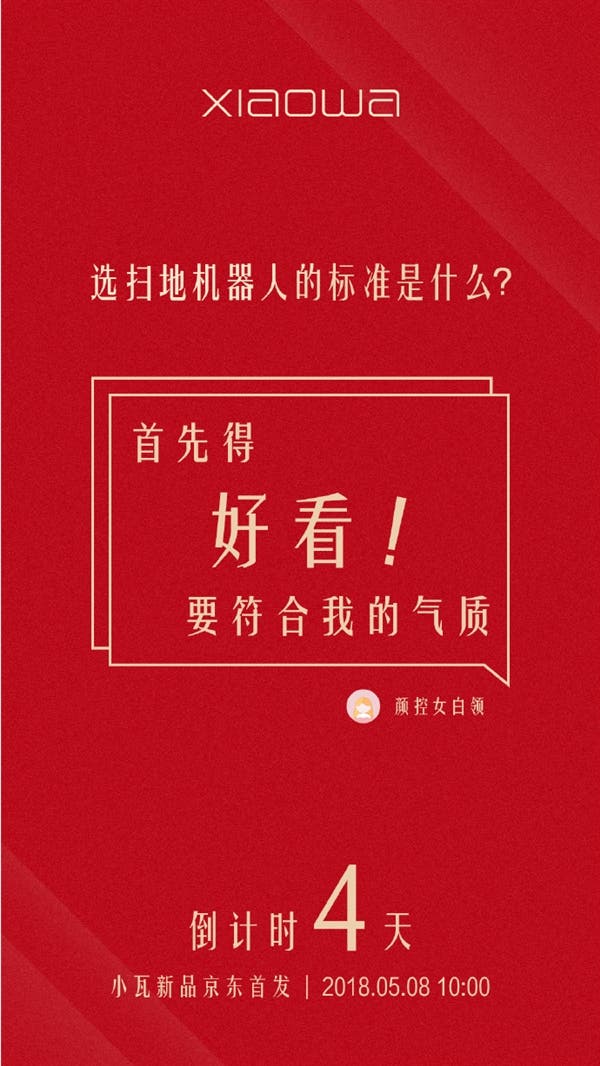 The smart cleaners are very useful. They not only help clean the whole house without dead ends but also meet the needs of patients with obsessive-compulsive disorder. In this sense, the Xiaomi vacuum cleaners have been always ranked high. Say, the second-gen Xiaomi Mi Robot Vacuum cleaner got a ranking of 9.1 at Akku-und-Roboter-Staubsauger.de. It’s the highest ranking, even surpassing the well-known iRobot Roomba 980. Not surprisingly, the first-gen model is the third.

Today the manufacturer published the first poster. But it only informs a new smart cleaner is coming from Xiaomi’s sub-brand, Xiaowa. So no details are known at this moment. But taking into account the fact all Xiaomi robot vacuum cleaners come with an identical design and a used to build the room map in real time and plan the first Z-shaped sweep path, the selling point of the upcoming models will be SLAM algorithm as well.

Of course, all those models support WiFi and can be controlled remotely from your smartphone. The new model will be no exception. But let’s stop making assumptions because its features will become known in the nearest future one after another.