Nowadays, the Chinese smartphone makers are gaining momentum. Though only a few of them are top-level players competing with Apple and Samsung, there are still many companies developing day by day. 360 Mobiles is among them, for sure. In January, the company published its sales numbers for 2017. Though it’s too far from the top ten that sells at least 20 million units yearly, its results are respectable. According to the report the smartphone maker shipped over 5 million phones. It is a 127% growth in comparison to last year’s results. It could reach such results due to 6 smartphones. Of course, each of them has its own group and category of customers, the 360 N6 Pro was a rule-breaker. That’s why many people have been waiting for the successor of this amazing handset. The 360 N7 has been a buzzword for a while. We know it will release on May 8. As its launch date is around the corner, we’ll see more leaks and spy photos. Today is no exception.

Yesterday, JingDong opened an appointment for the 360 N7. And though it’s currently priced at 9999 yuan, we understand this will change once it’s announced. The retailer’s site shows there are two memory combinations of 6+64GB and 6+128GB. So we can assume the memory capacity is known.

Moreover, the phone has passed through TENAA with a model number of 1807-A01. This simply means, it’s already ready to launch and we’ll be able to get our hands on it soon. At the same time, someone has managed to take a spy photo of an alleged 360 N7’s battery. According to it, the phone will sport a 4280mAh battery. 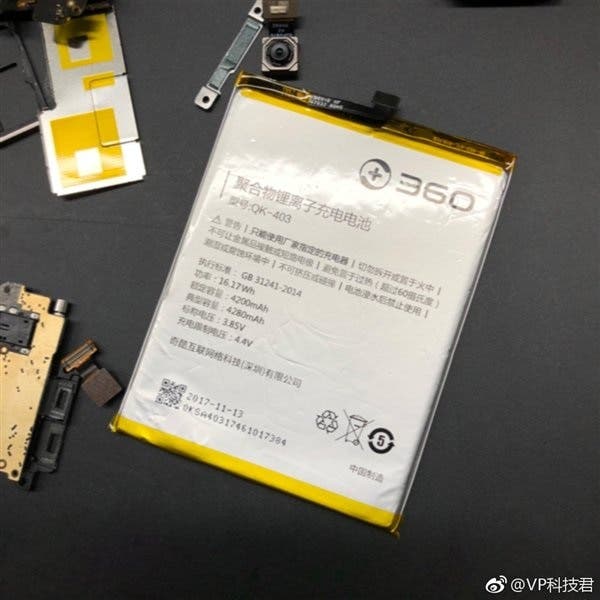 At last, various rumors say the 360 N7 will be packed with a 5.99-inch full-screen with an aspect ratio of 19:9 and a resolution of 2160×1080 pixels. Most likely, the Helio P60 will power it. And it will sport a dual-camera. As for the appearance, it will use an all-metal housing with two color options of Moonstone and Graphite Black.