Yesterday, Canalys published a report concerning the smartphone shipments in Europe in Q1 2018. According to it, the overall shipments dropped by 6.3%. And though the top three remains unchanged, Xiaomi continues showing an amazing growth rate of 999%!!! 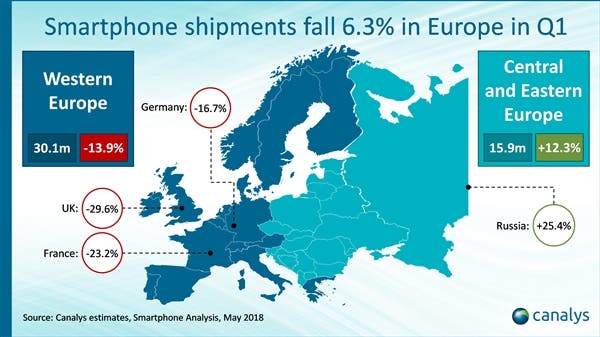 The global smartphone market is falling and no one can deny this. The European smartphone market is no exception. According to the latest report, it has dropped by 6.3% in the first quarter. And this the biggest drop in a single quarter. Moreover, Western Europe has had a decrease of 13.9%. Only 30.1 million units shipped. On the contrary, the Central and Eastern Europe showed a growth of 12.3%. But it’s a smaller market. That’s why there were shipped only 15.9 million units.

The South Korean is on the top, with 15 million shipped units. But it has had a decrease of 15%. On the other hand, even in this situation, Samsung has the largest market share of 33.1%. The Cupertino-based Apple is in the second position with a 22.2% of market share and a -5.4% growth rate.

Huawei and Xiaomi are on the third and fourth positions, respectively. But if Huawei has shipped 7.4 million units and shows a growth rate of 38.6%, Xiaomi sold 2.4 million, which is a direct 999% growth year-on-year. The company also mentioned the top trends in the European smartphone market. According to them, now people pay more attention to the full-screen with an 18:9 aspect ratio, dual-SIM card, memory options over 4GB, and dual/triple-camera modules.

As Ben Stanton, Analyst at Canalys, said: ‘This is a new era for smartphones in Europe. We are moving from a growth era to a cyclical era. This presents a brand-new challenge to the incumbents, and we expect several smaller brands to leave the market in the coming years.’