The follow up to the Galaxy Note 8 could arrive earlier than anticipated. Reports have it that Samsung may have decided on an early launch of the Galaxy Note 9, thereby breaking its annual rituals of unveiling its Galaxy Note devices at the August IFA conference.

As exciting as that may seem, a report earlier today revealed that Samsung is still having manufacturing difficulties incorporating the fingerprint reader into the display, so the company may be left with no option than to put in the rear sensor. That said, we have even more solid evidence that a lot more work is been done on the upcoming Galaxy Note 9 as a prototype of the device has been put through the paces of Geekbench test, leading to confirmation of a few of its specs.

Bearing the model number SM-N960U, the Galaxy Note 9 is seen running on the Snapdragon 845 the same chipset on the Galaxy S9, and its performances are within the range of other devices powered by the same chipset both in single-core tests and in the multi-core benchmark test. The Galaxy Note 9 prototype spotted on Geekench today is the same as the  Snapdragon 845 powered Galaxy Note9 spotted earlier spotted on Geekbench in March, except that the latest multi-core score fell short of the previous listing which could be an indication that the device is still undergoing series of optimization. It is based on Android 8.0 Oreo with 6GB of RAM. 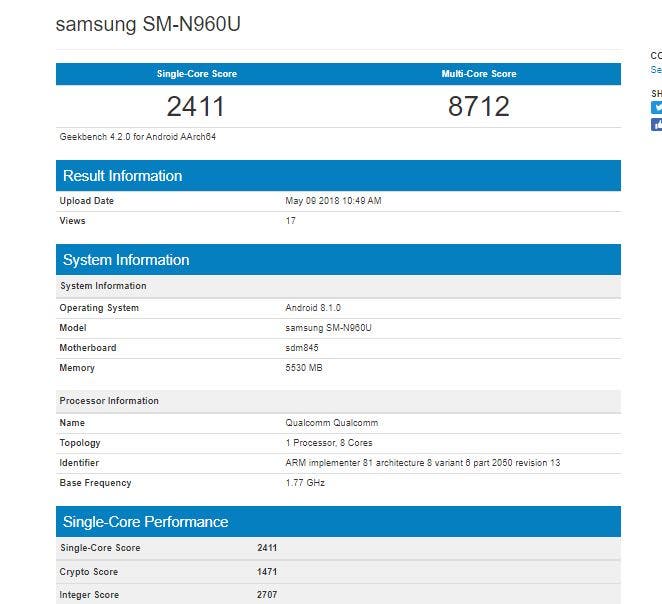 Two different variants of the Galaxy Note 9 had earlier been spotted on the Geekbench site, a variant with the Snapdragon 845 chipset and 6GB of RAM and the octa-core Exynos 9815 powered Galaxy Note 9 with 8GB of RAM, so it’s safe to assume that the Samsung Galaxy Note 9 will have two different processor variants, a trend that is not new to Samsung smartphones. This is supported by the report that there is two firmware builds for the Note 9 depending upon the processor.

We will bring you more Galaxy Note 9 updates as and when they arrive.