The Samsung Galaxy Note 9 has made an appearance on Geekbench, revealing majority of its specs along with the benchmarks. As is always the case, the Galaxy Note 9 is complete with the best of the best components in the market. 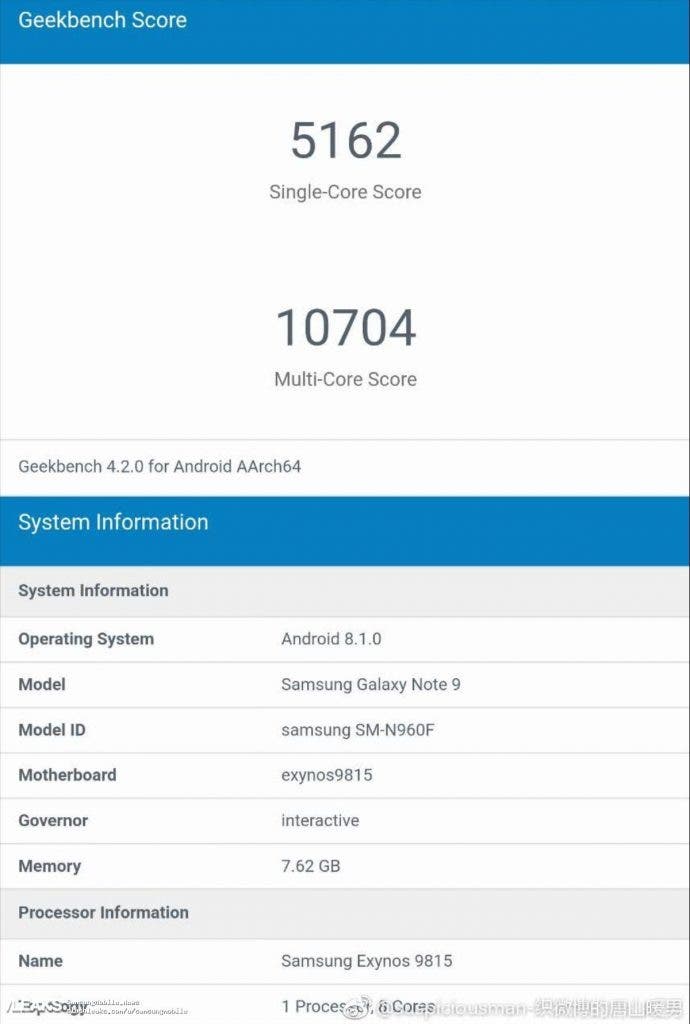 Codenamed SM-N960F, the Samsung Galaxy Note 9 will feature a whopping 8GB of RAM, Android 8.1.0 and the octa-core Exynos 9815. The highlight of all the specs is the Extnos 9815. It has not been unveiled yet and is probably the successor to the current flagship chipset, the Exynos 9810. The 9810 powers the Samsung Galaxy S9 and Galaxy S9+. It has scored 5162 points in the single-core and 10704 points in the multi-cote tests.

The Galaxy Note 9 had earlier made an appearance on Geekbench codenamed SM-960U, a variant with the Snapdragon 845 chipset and 6GB of RAM. It’s safe to assume that the Samsung Galaxy Note 9 will have two different processor variants, a trend that is not new to Samsung smartphones. This is supported by the report that there are two firmware builds for the Note 9 depending upon the processor.

There is a high possibility of the Galaxy Note 9 being released during autumn this year, since it has received CMIT(China Ministry of Industry and Information Technology) certification recently. Apparently, the Chinese variant of the Galaxy Note 9 is speculated to be codenamed “crown“. In other news, speculations are wild about the presence of an on-screen fingerprint scanner which Samsung has been trying its hands on for quite a while now. Some reports hint towards the presence of the on-screen fingerprint scanner while some reports say otherwise.

Samsung has not given their word regarding the same so we suggest you consume these reports with a pinch of salt. As far as the specs and features of the Note 9 are concerned, rest assured that they will be top of the line. Stay tuned!